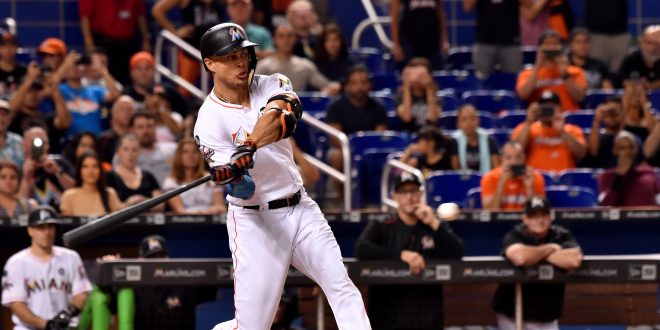 Disney is considered to be “The Happiest Place On Earth.” This week, Disney and Orlando becomes the epicenter for professional baseball. The MLB general manager meetings take place this week with the potential to shape the entire off-season before the highly anticipated Winter Meetings take place next month. This year, the general manager meetings have an extra excitement to them. The reason being is the apparent availability of Marlins slugger Giancarlo Stanton.

When former Yankees captain Derek Jeter and businessman Bruce Sherman bought the Marlins, it became clear that the group is planning on cleaning house. Partly because the new ownership group wants to build from the ground up. Another notable reason is that the group lacks the funds to support a substantial payroll. This led many to believe that several Marlins could be traded, including the face of the franchise Giancarlo Stanton. It’s a rare instance that a MVP candidate is on the trade market. Some of the teams that have appeared to show interest include the Los Angeles Dodgers, San Francisco Giants, St. Louis Cardinals, and Boston Red Sox. The Dodgers appear to be the logical choice, given that Stanton is from Los Angeles and the talent that the Dodgers could offer the Marlins. The Marlins will have a high price tag for teams interested in the four-time All-Star.

The Dodgers are indeed in the mix for Giancarlo Stanton, according to a source.

The general manager’s meetings is an opportunity for all thirty team’s representatives to meet with agents for the game’s top free agents. It allows both sides to see where they stand and what the market looks like for them. Some of this year’s biggest free agents include Diamondbacks slugger J.D. Martinez, Cubs’ ace Jake Arrieta, Royals third basemen Mike Moustakas, and Rockies closer Greg Holland. These players were certainly meet with several teams over the course of the next couple months.

To Accept or Look Elsewhere?

At 5 p.m. on Thursday, players, including some mentioned above, will have to make a decision about their free agency status. Thursday is the deadline for player to either accept or decline their team’s qualifying offer sheet. The qualifying offer, under the collective bargaining agreement, is $17.4 million. Arrieta, Moustakas, and Holland are just some notable names eligible for the pay day. Other players include Indians first baseman Carlos Santana, Rays starter Alex Cobb, and Royals’ Lorenzo Cain. Only a few players accepted last year after all players declined the offer the first two years of its existence. Thursday’s decisions could make free agency more interesting.

The meetings will take place the remainder of this week in Orlando as the MLB off-season officially begins. This off-season has the potential to bring major shock waves throughout the baseball world.