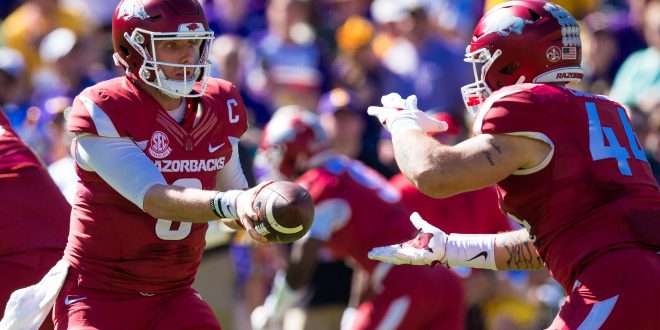 This Saturday, the Mississippi State Bulldogs will travel to Fayetteville to compete against the Arkansas Razorbacks. The Bulldogs were the first team of the season to actually give Alabama a run for their money, but of course Alabama stayed undefeated. Just the fact that they scored against Alabama is giving the team hope for the remainder of the season.

The Razorbacks have a 4-6 record so far for this season.  With only two games left in the regular season, a win is much needed for an improved record. It will be a challenging game, and Arkansas head football coach Bret Bielema recognizes that. The main thing that the Razorbacks need to focus on in order to have a chance at winning is to contain Mississippi State quarterback Nick Fitzgerald as much as possible.

Fitzgerald has thrown for 1,617 yards and 13 touchdowns this season.

As the fourth best team in the SEC currently, Mississippi State has good potential to take home the win in this game.

The team has had a tremendously better season than their opponents for the weekend, with a record of 7-3. Between running back Aeris Williams and Nick Fitzgerald, the pair has teamed up to average 250.6 yards per game on the ground. This has helped get the team to their rank in the SEC.

If they win this game, the team will have high chances of attending the Citrus Bowl in the postseason. Although they are the obvious favorite in this game, head coach Dan Mullen is still remaining humble as the game approaches. Similar to Arkansas’ head coach, Mullen is aware of the threat of the other team’s quarterback, Austin Allen, who just came back last week after an injury.

Previous NFL Preview: Jaguars Look to Roll Past The Browns
Next Gator Men’s Basketball Gets Another Blowout Win