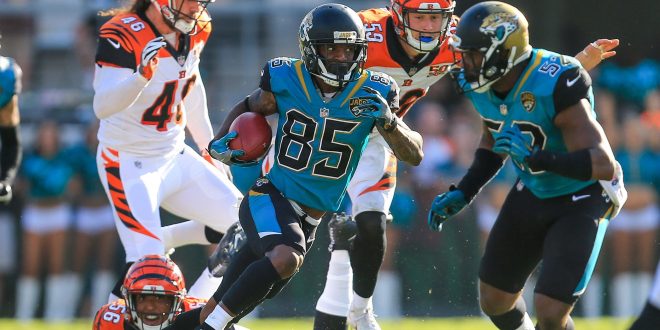 NFL Preview: Jaguars Look to Roll Past The Browns

The Jacksonville Jaguars (6-3) are heading into this Sunday’s game against the Cleveland Browns (0-9), ranked second in the AFC South. They are looking to continue what many consider to be an amazing season. It’s no confusion that within the past couple of years, the Jags have lacked a winning tradition, but for some reason this season they have a different mindset.

This is the first time the Jaguars have been 6-3 since 2007. They head into this game with a lot of confidence that this will be an easy one to overcome and grab the win.

Not only have they won the last four out of five games, they also have a key player making his NFL debut on Sunday. Dede Westbrook is making his first debut has a Jaguar, and is hoping to make a big statement with this being his first game. The expectations he has for himself are setting the bar high, by hoping to complete 200-yard receiving game. Saying things like that put a lot of pressure on an athlete, but he has the skill level and confidence to back it up.

Quick history tip: “one of the greatest debut by a rookie receiver was 217 yards (on 10 catches) and two touchdowns by Anquan Boldin.”

The Browns see themselves in the middle of what they call a multi-year rebuild.

What to expect on Sunday ⤵️ https://t.co/X4UARywgRV

Coming off of a tough loss to the Detroit Lions, the Cleveland Browns cant quite find the grasp of winning this season. They’ve face many trials and tribulations throughout this NFL season.

The Browns are heading into Sunday’s home game carrying a big load on their shoulders. They have not had a good start to their season, not being able to grab even one win from the beginning of the season through Week 10. Although, they have been having a horrible season, their defense has not gone unnoticed throughout the league. The defensive side of the ball has been the only light at the end of the tunnel for this long season.

With the loss of Pro Bowl left tackle Joe Thomas, they have lost another major player on their team. Jamie Collins Sr. is out for the remainder of the year due to an MCL injury in Sunday’s game to the Lions.

The Browns and Jaguars will square off in Cleveland this Sunday at 1 PM EST.