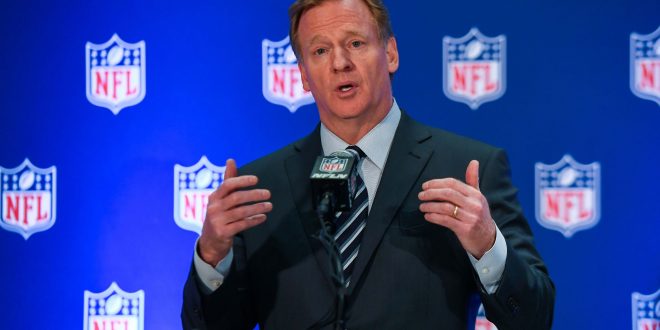 The feud between Roger Goodell and Jerry Jones is grabbing all the headlines in the National Football League. Jerry Jones is reportedly threatening to sue the NFL if Roger Goodell’s contract is extended past the 2018 season. This is in wake of reports that the owners are meeting on December 13th to discuss Roger Goodell’s possible contract extension to remain NFL Commissioner. This meeting is part of the usual NFL winter meetings, per several of ESPN’s NFL reporters. Regardless, the relationship between the owners and the league’s senior executives is still on bad terms. Specifically, Jones relationship with Goodell is going down the drain. Ezekiel Elliott’s chaotic case resulting in his suspension is a huge factor in all of this.

Roger Goodell told Jerry Jones that he would not suspend Ezekiel Elliott – one more reason this is where it is. https://t.co/ZPqb6jJvZE

Colin Kaepernick. Ezekiel Elliot’s suspension. The list goes on and on.

The league’s TV ratings and favorability have both periodically gone downwards this season. Yet, Roger Goodell’s lawyer is reportedly asking for $49.05 million per year. That is an insane amount of money considering the $42 million follar compensation he received for the past five years. The contract also would pay him $2.5 million per year less based on the previous statement, according to ESPN. Not even some NFL players can believe what Roger Goodell is asking for.

#Bucs DT Gerald McCoy when being told about commissioner Roger Goodell's new $50M/yr contract: "He gets how much?! Five zero?!" pic.twitter.com/9lpAvyvklL

All in all, Jerry Jones is starting the biggest rivalry in the NFL this season. This feud will leave either Goodell with control of America’s biggest sports league. The Dallas Cowboys owner is in favor of an ‘incentive-based’ contract rather than the contract being made by the six-owner compensation committee. Jones threatens to sue unless the ownership gets another vote on the committees contract. A power move indeed considering the leaked information about his new deal requesting lifetime use of a private jet and health insurance. Jones was recently removed as a non-voting contributor to the committee and was accused of conduct “detrimental to the league’s best interests” by the committee in a letter. Jones explained why he was removed in an interview.

Future of the NFL

Jones wrote a letter of his own to Goodell citing issues the NFL is facing under his watch over the last two years. This includes the TV ratings, unhappiness of advertisers, player suspensions, ticket sales, and more. In other words, Jones does not believe Goodell deserves this contract when the league is under-performing. Jones told Goodell “I’m gonna come after you with everything I have,” during an August conference call when Goodell told Jones of running back Ezekiel Elliott’s six-game suspension.

With this in mind, this is only the beginning for the long story ahead in the NFL.

Sports Journalist @ESPNGainesville, @VAVEL, @VAVEL_USA, @WUFTNews. Telecom at @UF. Miami Aficionado. Views are my own. RT's ≠ endorsements.
Previous A Look Around the NFL
Next Preview: Gators Look To End Skid As They Host UAB