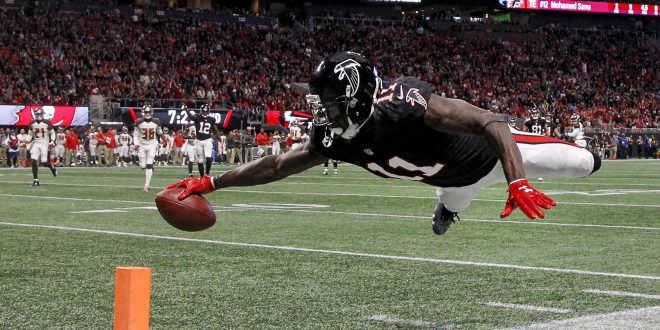 The Tampa Bay Buccaneers fell to 4-7 on the season, after a 34-20 road loss to the Atlanta Falcons.

The Buccaneers moved the ball fairly effectively on Sunday, but left points on the field. On the team’s opening drive, they drove 57 yards to the Atlanta 18-yard line before failing to convert on a 3rd-and-4 and had to settle for a field goal. Later in the half, the team drove all the way to the Atlanta 9-yard line before settling for another field goal. Tampa Bay would go into the half down 20-6, but they could have been down by only six points if they converted on those two red zone opportunities. The Bucs had 373 total yards and 27 first-downs, but only converted 4 of their 11 third-down attempts and went 2-5 in the red zone. The offense improved in the second half, but it wasn’t enough to mount a comeback. Ryan Fitzpatrick went 27/44 for 283 yards and Doug Martin was the Bucs’ leading rusher with 33 yards on 7 carries.

Tampa Bay’s defense had a tough outing on Sunday afternoon. The team gave up 516 total yards and 23 first-downs to a hot Falcons offense. Atlanta scored 34 points, tying their season high. The Falcons averaged 8.1 points per play and put up points in six of their nine possessions. Tampa Bay failed to get stops on third-downs and barely provided any resistance to the Falcons offense. The team did recover a fumble in the fourth quarter when they were down by just seven but failed to tie the game in the next possession.

Falcons star receiver Julio Jones had one the best games of his career this week. Jones had 12 receptions for 253 yards and two touchdowns. This is the third time in his career that he has had over 250 receiving yards in a game. No other active NFL player has more than one. Jones averaged 21.1 yards per reception and seemed unstoppable against a poor Buccaneers’ defense. Jones’ day was highlighted by a 51 yard touchdown pass from Mohamed Sanu.

Falcons quarterback Matt Ryan said that it never really surprises him when Jones has performances like this one.

What’s Next For Tampa Bay?

The Bucs’ season hasn’t been nearly as successful as they thought it would be. The team has struggled all season with injuries, lack of effort, and poor play all around. At 4-7, the Buccaneers sit three full games back of a wild card spot and are in last place in their division. Their playoff chances are very slim at this point and the team would likely have to win the rest of their games to even have a shot at the playoffs.

Tampa Bay will travel to Green Bay for their week 13 match-up with the Packers. Kick off is at 1 p.m. ET.