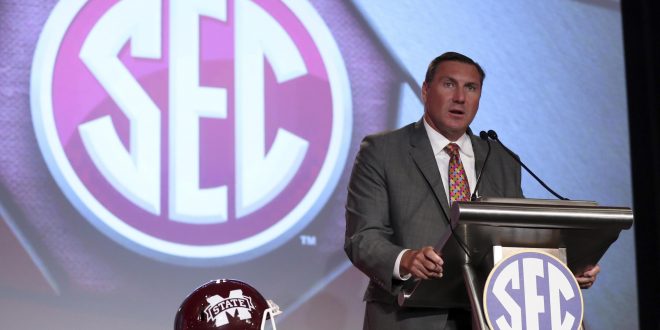 Dan Mullen is the new head coach of the Florida Gators football team. While the position is a fickle one (5 coaches in 8 years), Mullen arguably brings more to the table than his predecessors. Will Muschamp was a successful Saban assistant who failed to make a smooth transition as a head coach. He also failed to produce a quarterback. Like Muschamp, Jim McElwain was a successful Saban assistant who led the Gators to back-to-back SEC East titles. But, despite the proclamation that he could “win with his dog at quarterback,” McElwain fell short of expectations at the position, too.

One man who can mold a quarterback is Dan Mullen. At Utah, he created a first overall pick as the quarterbacks coach. During his time as the offensive coordinator at Florida, he developed two championship leaders… one of who won the Heisman. As the head coach at Mississippi State, Mullen coached a future NFL Rookie of the Year and a Heisman contender. Surely, Florida did not overlook this in the hiring process, as they have introduced a new starting quarterback every year since Tebow’s departure. Now, let’s take a look at Mullen’s quarterback development heading into Florida.

In 2004, Mullen accepted the position of quarterbacks coach under Urban Meyer at Utah. There, he met up-and-coming sophomore Alex Smith. Under Mullen, Smith threw for almost 3000 yards, 32 touchdowns, and only four interceptions during his junior season. He also found some glory on the run, rushing for more than 600 yards and 10 touchdowns.

He led the Utes to an undefeated season, including a Fiesta Bowl win. After that, Smith declared for the NFL draft, where he went first overall. But, Smith was not the only piece to leave Utah that season. Coach Urban Meyer went to Florida… and took Dan Mullen with him.

In Gainesville, Mullen played the role of offensive coordinator. His first task was quarterback Chris Leak. Mullen tailored the offense to Leak’s abilities, and Leak led the Gators to a 9-3 season. He also picked up All-SEC Honors.

Before Leak’s senior season in 2007, he already had a year with Mullen under his belt. That year, Florida won its first SEC title in 7 years. Then, they won the National Championship in a 41-14 beatdown of Ohio State. Leak was awarded MVP and broke the record for career passing yards.

Now, Mullen is on his third quarterback. Here is a list of accomplishments that Mullen helped Tim Tebow achieve in three years. Remember, he was Leak’s back-up during his freshman year.

Ahead of being named the starter his sophomore year, people questioned Tebow’s passing ability. By the end of the season, he had the second highest passing efficiency rating. He set two SEC records and one Florida record. A first team All-SEC selection and consensus first team All-American selection were nice. But, shortly after, Tim Tebow became the first sophomore to win the Heisman trophy.

The next year, Tebow led the team to another SEC and National Championship title. He broke more records and finished third in Heisman voting. During his senior year, a loss in the SEC Championship kept the Gators out of National title contention. The Gators were able to win the Sugar Bowl, though.

In the end, Tebow finished with almost 10,000 passing yards, 88 touchdowns, and 16 interceptions. He rushed for almost 3,000 yards and 52 touchdowns. As Tebow’s tenure ended, Meyer and Mullen left a year later. Meyer went to Ohio State and Mullen got a head coaching job at Mississippi State.

As head coach with the Bulldogs, Mullen developed Dallas Cowboys quarterback Dak Prescott. Prescott did not start until his redshirt sophomore season. But, he brought the Bulldogs to their first number 1 ranking during that season. The next season, he won a slew of awards and declared for the draft. He finished his college career with almost 10,000 passing yards, 70 touchdowns, and 22 interceptions. He also rushed for almost 3,000 yards and 41 touchdowns and received four catches– three of which turned into touchdowns.

Prescott got off the board in the fourth round and was the fourth option at quarterback for the Dallas Cowboys. However, his resilience from Mississippi State days gleamed. The Cowboys finished 13-3 and he won Rookie of the Year.

Last but definitely not least, Mullen brought Nick Fitzgerald glory. Fitzgerald went to Mississippi State as a three-star recruit. He redshirted as a freshman, but made a splash in his sophomore and junior seasons. He passed for almost 4,000 yards, 36 touchdowns, and 21 interceptions (not great, but the Bulldogs still finished the regular season 8-4). Almost 3,000 rushing yards and 30 touchdowns are also on his resume.

Fitzgerald’s stats may not read beautifully, but he was instrumental in a massive win over LSU. In fact, Fitzgerald’s LSU game generated Heisman buzz. Then, he almost led Mississippi State to a victory over top-ranked Alabama. Had Alabama not expertly timed a pass-interference call, the win would have gone to the Bulldogs. Now, if you’re thinking “there’s more to a team than its quarterback,” chew on this. During rivalry week, Fitzgerald and the Bulldogs took on an Ole Miss team that loss to Arkansas. Fitzgerald exited the game with a nasty ankle injury in the first quarter and the Bulldogs lost.

Matt Corral is a five-star recruit who is still committed to Florida. His commitment seems solid, given that he posted this on Twitter after Mullen’s hiring.

There’s no telling what the future holds for Florida, Mullen, or his 5-star commit. But, Mullen’s track record at the position is promising.

Previous No. 1 Duke Overcomes 17-Point Second Half Deficit To Beat No. 7 Florida, 87-84
Next Buccaneers Fall to Falcons Behind Julio Jones’ Career Game