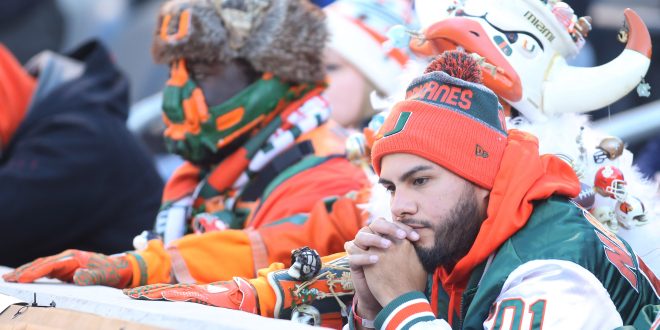 The Hurricanes had everything going their way heading toward the ACC Championship Game. With a 10-0 record and big wins over the likes of Notre Dame and Virginia Tech, Miami looked like it would be a sure pick for the College Football Playoff. However, Pitt had other ideas. Pittsburgh upset the Hurricanes by a scoreline of 24-14, now putting Miami in a vulnerable position ahead of the ACC Championship Game against Clemson on Saturday.

Miami struggled to move the football. Quarterback Malik Rosier completed just 15/36 passes, although he did throw two touchdowns. Rosier had very little help from the ground game, as Miami rushed for 45 total yards on 23 attempts; less than two yards per carry. Rosier had the majority of the rushing yards and attempts, with 31 yards on 12 carries.

Time to focus on the ACC Championship. pic.twitter.com/as5WDITBIh

Failure to convert on third downs

The Hurricanes converted just four of their 15 third-down-conversion attempts. Without the threat of the run, Rosier was unable to move the chains for the Miami offense on most occasions.

A case of looking ahead

Most people would’ve thought that Miami could easily handle a 4-7 Pitt side that had struggled in conference play. Perhaps the Hurricanes, too, were resting on their laurels. Whatever the case may be, Miami allowed an inferior opponent to beat them just before the ACC Championship Game against Clemson. Now, with a loss to an average team in Pitt, Miami will have a difficult time vying for a Playoff spot.

A loss is hard to swallow, but the Canes can't sulk.

There is something big to play for on Saturday. #BeatClemson pic.twitter.com/4fSGTd2hKJ

The Hurricanes dropped five place to No. 7 in the Week 14 AP poll rankings. Now they face the test of playing No. 1 ranked Clemson in the ACC Championship Game on Saturday. Unless the Canes can overcome Clemson, their dreams of making the College Football Playoff is virtually over.

Kickoff will be at 8 p.m. Saturday on ABC.