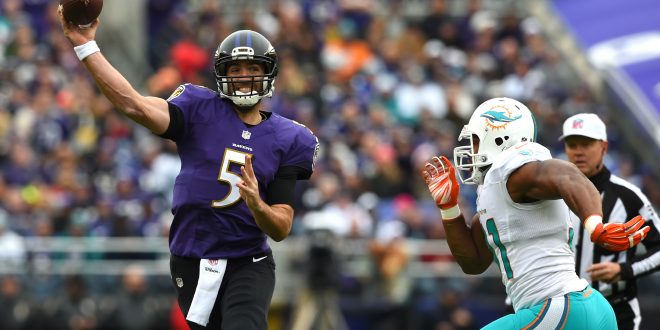 The Baltimore Ravens and the Houston Texans will close out week 12  of the NFL season in Monday Night Football. Houston will be hosting Baltimore, who are at an even 3-3 on the road this year. The 5-5 Ravens are seeking to improve their record if they still have any hopes of getting to the playoffs. The Texans sit at 4-6, which means they could possibly pass the Jaguars and earn 2nd place in their division – if they act now.

The Ravens have a 6-2 regular season record against the Texans. Lucky for Baltimore, they’ll be facing yet another back up QB. Their defense has been strong this year and they’ll have an opportunity to flourish against Tom Savage, who has struggled to replace Deshaun Watson. If the Ravens’ defense is rolling, they’ll be in a good spot to head back to Baltimore with a victory.

The Ravens are also tied with the Jacksonville Jaguars in leading the NFL in takeaways- at 23. Something to look out for is the Smith-Hopkins match up. CB Jimmy Smith is the best cover CB in the league this year. Watching him against Houston’s wide receiver DeAndre Hopkins will be entertaining. Hopkins is third in the NFL for receiving yards.

If the Texans want to win tonight, they’ll need a good game from Hopkins. He currently leads the NFL with touchdown catches with 9 catches and ranked 3rd for yards as mentioned above. If they can get him involved early, it would build momentum for Savage against a tough Baltimore defense. Another guy to keep in mind is defensive end Jadeveon Clowney. With 8 sacks this season and 7 assisted tackles, the Texans are counting on him to bring the defense together.

Kick off for this game starts tonight at 8:30 p.m.

It's a fight to stay alive in the AFC playoff hunt on Monday Night Football. pic.twitter.com/gMTHz4x5eN