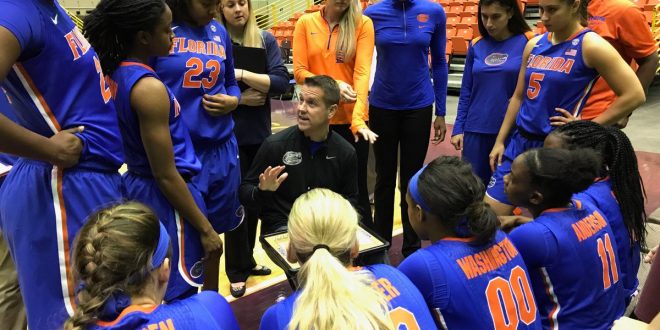 The Gator women’s basketball team shot lights out last week in Savannah, Georgia. Florida set the record for most three pointers drained with 15 on Tuesday. Then, broke that record with 17 made threes on Thursday. The Gators seem to have finally found their stroke from beyond the arc. They hope to maintain this success as they welcome Jacksonville to the O’Connell Center Tuesday night.

Being away from home for the holidays can be disappointing for some. For the Gators, it was an opportunity to improve. Sophomore guard Sydney Searcy says one area that improved was sharing the basketball. The Gators totaled a season-high 21 assists in the win over Savannah State on Thursday. The most notable area of improvement came from three point land. Setting the program record for threes made surely brought much needed confidence in the Gator shooters, after a poor outing against Florida State before going to Savannah. Junior guard Funda Nakkasoglu wants her teammates to keep firing away from beyond the arc.

The Gators suffered a key injury in Savannah to Nakkasoglu. She suffered an ankle injury at late in the fourth quarter of Tuesday’s win over Richmond. Nakkasoglu was absent the final two games in Savannah. She will make her return to the court Tuesday against Jacksonville. Nakkasoglu is excited to get back out on the court. With Nakkasoglu returning, the Gators lost a key bench player for the season. Sophomore guard Sydney Morang will miss the rest of the 2017-18 season due to concussion problems. Gators head coach Cam Newbauer made the announcement before practice Monday and says Morang will probably redshirt.

The Gators are no strangers to lacking depth at the guard position. They experienced this when Nakkasoglu went down and had success. Graduate senior forward Paulina Hersler says it was the reward for hard work the team has put into practice. The Gators have approached that situation and the loss of Morang with the mindset of next man up.  Coach Newbauer said that stepping up early in the season to make up for a key injury helps a team. With Morang out, the Gator guards will be expected to take on more responsibility and minutes. Coach Newbauer said that the group is ready to embrace their new roles.

Jacksonville comes into Tuesday’s showdown with the Gators after winning both of their games at the Fairfield Inn Thanksgiving Classic last week. Wins over Monmouth and Webber International bring the Dolphins to a 4-2 record to start the season. Coach Newbauer knows that Jacksonville will pose a challenge to the Gators. The Gators’ recent success distributing the basketball will be tested against the Jacksonville defense and will prove key to the game’s outcome. The Dolphins average eight steals a game through six games. Coach Newbauer says the best way to beat Jacksonville is to play their style of basketball.

Tuesday’s matchup with the Dolphins will tip-off from the O’Connell Center Tuesday night at 7:00 p.m.