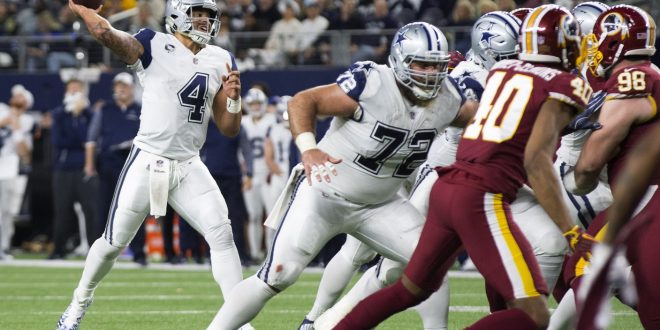 Under the Thursday night lights in the AT&T stadium, the Dallas Cowboys (6-6) defeated the Washington Redskins (5-7), right at home with a final score of 38-14. The Cowboys’ win was their first in three weeks. This win over Washington was also the second one this season for Dallas.

Dallas Cowboys quarterback, Dak Prescott, the NFL rookie of the year last season, was getting X-Rays on his swollen right hand when Cowboys rookie Ryan Switzer made his first career touchdown on an 83 yard punt return.

Dak Prescott's right hand seems to be swelling more by the second. Can't be easy to throw when your hand looks like a bubble. #WASvsDAL #Cowboys pic.twitter.com/vXEkcrEyL6

However, Prescott didn’t let this swollen hand hold him back.

“I was nervous at first, but I went in and got the swelling down but I kept the ball in my hand and kept the blood flowing and it was great.” Prescott said about his in game injury.”

Prescott’s two touchdown passes, sure helped the Dallas Cowboys in their 38-14 win over the Washington Redskins Thursday night. His touchdown passes were first to the Cowboys team career receiving leader, tight end Jason Witten. The second one was a record breaking 13-yard catch by Dez Bryant. This was Bryant’s 72nd career touchdown. He broke a tie with Hall of Famer and Olympian Bob Hayes, for the most in Cowboys franchise history.

The Cowboys didn’t trail at all during this game. Their offense was slow though. Dallas committed three turnovers in the first half and four overall by Washington. With running back Ezekiel Elliot’s six game suspension still going on due to alleged domestic violence, the Cowboys had Alfred Morris shine Thursday night in the RB position.  Morris, the former Florida Atlantic University Owl, who also used to play for the Redskins got some revenge on his former team. Although he started slow with only 38 yards in the first half. He ended up bouncing back that night.  He rushed for 127 yards and also ran for a touchdown. Overall he averaged 5.9 yards per carry in the second half and rushed for 89 yards Thursday night.

What Does This Mean For Washington?

The Cowboys defense didn’t help either with the Redskins loss. Redskins quarterback Kirk Cousins was sacked four teams and the Cowboys defense forced four turnovers, this was done by Cowboys defensive end Demarcus Lawrence who led the defense. The highlight of Lawrence’s game was during the second quarter, where he forced a strip sack on Cousins, where Dallas then recovered the ball.

Also, to prove that Thursday wasn’t Cousins’s night, he threw two interceptions and lost a fumble.

Redskins wide receiver Jamison Crowder, let a pass go through his hands on Cousin’s first interception and also fumbled on a punt by Dallas.

This game was Washington’s fourth straight loss to the Cowboys.

“If you think it’s a lack of effort, you just don’t know football. It was one thing after another and they were just mistakes and we have to correct them” Cousins said.

The Redskins, who are in the NFC East were already out of the division title. After this game though, the Redskins are pretty much out of the postseason.

Title Is Not Official, Yet

Although this was a big win for the Cowboys, they still have a bumpy road to the playoffs especially with Elliot serving his suspension for two more games. It’s no question that the Philadelphia Eagles are at the top right now, but the Cowboys have forced the Eagles to wait until at least Sunday to clinch the division title.

Previous No. 2 Seed Florida Sweeps Alabama State In First Round
Next The Jacksonville Jaguars To Host The Indianapolis Colts For Rematch