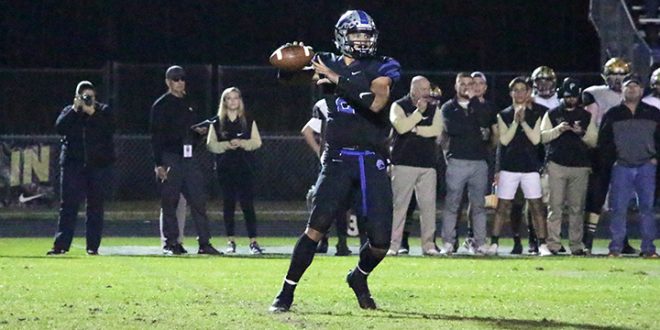 Riley Smith, one of the quarterbacks that Bartram Trail utilizes, looks for an open receiver down the field. Photo by David Street.

Bartram Trail’s magical season got even more magical on Friday night. In one of the Class 7A semifinal games, the Bears knocked off a Plant Panthers team that is consistently one of the top teams in the state of Florida.

The Bears had the odds stacked against them. Not only were they previously 0-3 in state semifinal games, they were facing a Plant team that’s won four state championships. However, the Bears were determined to finally get over that hump.

The first half belonged entirely to Bartram Trail. The Bears completely overpowered the Panthers in all phases of the game. The team made a statement from the get-go by blocking a Plant punt. Joey Gatewood, one of the quarterbacks that Bartram Trail utilizes and a four-star committed to Auburn, helped the Bears capitalize on that moment by notching a 28-yard touchdown run. The PAT was good, making it 7-0 Bartram Trail.

Later, Riley Smith, the other quarterback that the Bears utilize, had his pass picked off by Plant defensive back Smoke Mungin. However, Bartram Trail quickly returned the favor when defensive back Timothy Adams intercepted a pass from Plant quarterback Jordan McCloud and took it 40 yards for a pick-six. The PAT was then good, making it 14-0 Bears.

Plant finally got on the scoreboard when McCloud successfully converted on a 4th-and-12 with a 27-yard touchdown pass to receiver Alex Carvajal. With the PAT being good, the Panthers trailed the Bears 14-7.

In the second quarter, Gatewood had another long touchdown run, this time for 45 yards. The PAT was then successfully converted, making it 21-7 Bears. Smith then made up for his miscue early in the game with a 1-yard touchdown pass to receiver Kevin Maurer to help put the Bears up 28-7 at the end of the first half.

In a game that surely looked like it was going to be completely dominated by Bartram Trail, the Panthers kept their composure in the second half and slowly started crawling their way back, making a raucous Bartram Trail crowd nervous. The Panthers started the second half offensively by getting a 26-yard touchdown run from running back Walter Wilbon. The PAT was no good, making it 28-13 Bartram Trail.

The Bears eventually added to their lead when kicker Ethan Dudley kicked a 26-yard field goal to help them up 31-13. Later in the game, Plant running back Leonard Parker was off to the races with a 72-yard touchdown run. The Panthers then successfully converted a 2-point attempt, making the score 31-21.

Later, Ethan Dudley kicked another field goal to help put the Bears up 34-21. That would be the last time the Bears would put up points, as the Panthers did an admirable job of containing their offense in the second half. As the game started to come to a close, Parker got another rushing touchdown for the Panthers.

Also, just like before, the Panthers successfully converted a 2-point attempt, making it 34-29 putting them within sneaking distance of the Bears. However, in the end, Plant’s valiant attempts were not enough. The Bears held on and made history as they clinched their first state championship appearance.

Congrats to @BTHS_Football for making it to their first ever State Championship game! A special congratulations to Head Coach Sutherland, whose success is a direct reflection on his determination to develop men built for others. #SemperVirtus #ProudofBearNation

What Sutherland had to say

After the game, Sutherland talked about the love he had for his team, how quarterbacks Gatewood and Smith have been all season, and what his team needs to do to prepare for the 7A state championship.

The Bartram Trail Bears will take on the Venice Indians Saturday, December 9 at 3 p.m. in Orlando for a chance to win the 7A championship.