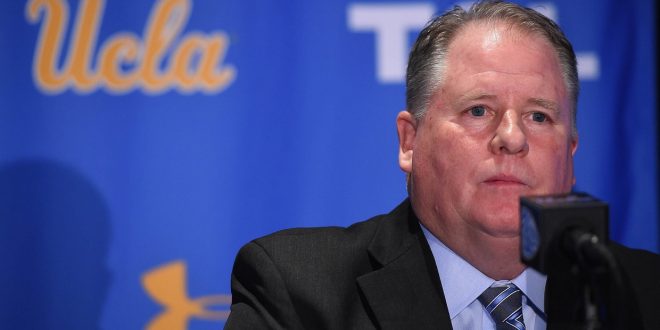 The college football world has been flipped upside down over the past few weeks. Alabama snuck into the College Football Playoff over Big Ten champion Ohio State, Georgia won the SEC, UCF remained undefeated and head coaches have been fired and hired on what seems like a daily basis.

There are still some major programs with head coaching vacancies. Tennessee, Arkansas, Florida State and UCF are all looking for a new leader at the helm. Let’s take a look at who has been hired and fired over the past month.

Jimbo Fisher was given a 10-year, $75 million contract ($7.5 million annually) by Texas A&M to become their new head coach. He led the Seminoles to an 83-23 record over eight years, including three ACC titles. Fisher was reportedly disgruntled by Florida State’s refusal to put more money into the football program. With many of the top coaching options off the board, Florida State is getting a late jump on their search. They have reported interest in Oregon’s Willie Taggart,  Virginia Tech’s Justin Fuente, and USF’s Charlie Strong.

Arkansas finished 4-8 on the season and went 1-7 in the SEC. They just hired Hunter Yurachek as the program’s Athletic Director. Yurachek was the vice president for intercollegiate athletics at the University of Houston. His first job as Athletic Director will be filling the vacancy at the helm of their football program. The Razorbacks had a plethora of interest in Auburn’s Guz Malzahn, but he returned to Auburn on a seven-year deal. The program is likely to hire Memphis head coach Mike Norvell or SMU head coach Chad Morris.

Tennessee had a disastrous year. They went 4-8 on the season including 0-8 in the SEC, and have had much difficulty finding a quality coach for their program. They agreed to terms with Ohio State defense coordinator Greg Schiano, but dismantled the deal after receiving public backlash for the hiring. It seems that they are focused on two main candidates.

UCF has had a sensational season and remain the only undefeated team in Division I football at 12-0. Former head coach Scott Frost was able to completely turn the program around. In 2015, they went 0-12, and are now slated with a match-up against No. 7 Auburn in the Peach Bowl. Frost was unable to turn down the head coaching job at Nebraska, his alma mater. Like FSU, UCF has gotten off to a late start in their head coaching search. There seems to be three candidates in the mix for the open position: UCF offensive coordinator Troy Walters, Clemson offensive coordinator Tony Elliot, and Toledo head coach Jason Candle.

All four programs must fill their head coaching vacancy soon for recruiting purposes. National Signing Day is February 7th, but the early signing period is December 20-22. These programs might lose out on some of their top recruits if they don’t hire a head coach within the next week or so. While fans might be worried about the direction of  their respective team, they shouldn’t be overly concerned. They are all in prime position to snatch a highly-rated coach from a mid-level school.