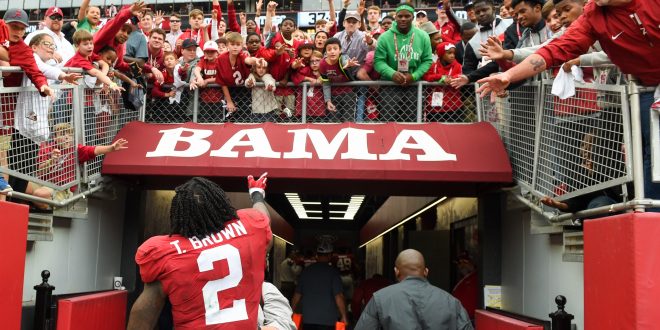 It’s officially bowl game season. That means college football’s finest will come together and keep your holiday season filled with joy or anger depending on how your team plays. Check out who’s playing who and how they got there.

Alabama and Clemson are no strangers. They’ll meet for the third consecutive year in the playoffs in the Sugar Bowl for a rematch of last year’s national championship game. Who wouldn’t want to start off 2018 with this developing rival? It’s safe to say that Nick Saban is on the revenge tour. He’s not a guy that strikes me as soft when it comes to getting revenge, and that revenge is another national title. Expect Jalen Hurts to lead the Tide to victory with his 2,000 plus passing yards this season and 15 touchdowns. This game is set for Jan. 1.

The Bulldogs have been waiting since 2005 to return to prominence and Kirby Smart has done just that this season. After the way Georgia handed Auburn a loss, the Dawgs will have a lot on their plate when it comes time to face Heisman hopeful Baker Mayfield in the Rose Bowl. However,  Georgia’s defense, which has allowed only 271 yards per game this season, will stand in Mayfield and Oklahoma’s way on Jan. 1 at 4 p.m. in Pasadena, California.

Auburn had a nice run this season, with their win against the Tide, things looked hopeful. However, Georgia dashed those hopes in the SEC Championship game. The Tigers will finish out their season in the Peach Bowl when they play undefeated UCF.  UCF has had an incredible season, coming from 0-12 in 2015 to 12-0 in 2017, thanks in large part to head coach Scott Frost. After winning the American Athletics Conference, Frost announced that he was parting ways with the Knights and taking the job as Nebraska’s head coach. Auburn will probably take advantage of that, considering this could be their third undefeated team in their last five games that they’ll beat. This game is set for 11:30 a.m. in Atlanta on Jan 1.

The Citrus Bowl brings these two together. LSU is no stranger to the Citrus Bowl, this is their second consecutive season that they’ll play in this bowl. The tigers are also familiar with the fighting Irish, this will be their fourth match up in a bowl game. Both of these teams wrapped up 2017 with 9-3 records. In past bowl games against the Irish, LSU at least had Leonard Fournette, their star running back. But now the tides have turned. Notre Dame is the one with the bragging rights in this area. Josh Adams is their secret weapon. Adams is said to be one of the most productive running backs in the country in 2017. Through eight games, Adams rushed for 1,169 yards (146.1 yards per game) and 9 touchdowns. Best of luck, Tigers. This game is in Orlando on Jan. 1

Mississippi State vs. University of Louisville

The Tax slayer bowl will have these two 8-4 teams going head to head. The Bulldogs are in a tight spot after loosing Dan Mullen to Florida, their new coach, Joe Moorehead won’t be leading the Dogs, but Greg Knox will lead the team for now. The Dogs aren’t new to bowl games, they’ve made it in one for the last eight years. However, their coaching for this game is all over the place. According to Knox, the Quarterbacks coach will call plays, and the safeties coach will run defense. Offensive line? Tight ends coach will take care of that. Regardless, Mississippi State has a team with a lot of heart. Anything is possible in this showdown. And oh, don’t forget your cowbells! This game will be Dec. 30 at noon.

These two came face-to-face in the Outback bowl nearly five years ago. The Gamecocks rank 12th out of 14 in the SEC for total offense. They average 340 yards per game. Jake Bentley is another issue. He’s thrown 11 interceptions. With major offensive woes, the Gamecocks will have to be careful against the Wolverines. Their defense is slightly better, ranking 7th in the SEC in yards allowed. This match up is in Tampa on Jan. 1 at 12 p.m.

The Belk Bowl will bring these two teams together in North Carolina on Dec. 29. Texas A&M and Wake Forest have never played each other. However, this game poses to be an interesting one. The future coach of The Aggies will have had some experience against the Deacons. Jimbo Fisher is likely to be announced the new coach this week. If Fisher’s switch to the SEC runs smoothly, the 7-5 Aggies have some hopes of finishing their season at 8-5.

University of Kentucky vs. Northwestern

Kentucky started their 2017 season looking bright, but could only finish out at 7-5. They’ll face the  Northwestern in the Music City Bowl on Dec. 29 at 4;30 p.m. Northwestern sits at an impressive 9-3 . UK’s rushing attack could be on their side for this game. Keep your eye on Benny Snell who’s rushed 1,318 yards and 18 touchdowns. If UK can rally around him, they may have a chance in Nashville.