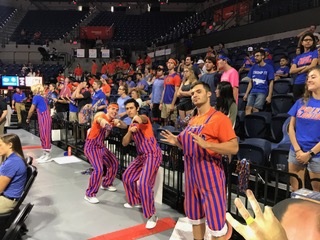 FEATURE: How UF Fell in Love with Volleyball

One of the more unique things about the University of Florida is the importance of athletics on its campus.

Of course, sports such as football, basketball, and baseball will be getting most of the attention but that doesn’t mean that the other sports don’t get any love either. Students at UF started obsessing with a different sport…. volleyball.

This time last year, the Stephen C. O’Connell center was empty. The Florida Gators volleyball team was holding their matches quietly in the Lemerand Athletic Center. UF was forced to hold their matches there because of the O’Dome’s $64.5 million dollar renovation. Crowds were small if any and there wasn’t much buzz on campus.

Regardless of the number of people in attendance, the team continued to take care of business on the court. They won 27 of the 31 matches they played and held a 12-2 record at “home”. They won the SEC title and made the NCAA tournament but something wasn’t right. Florida was selected as a regional host but lost in the 2nd round in their “home away from home” court against in-state rival Florida State. The players will never admit it but they were at a disadvantage all season long.

A year later Florida finds themselves stronger. As a team and as a community. The Gators played in front of a packed crowd all season long in the new Exactech Arena.

No longer hidden and right in plain sight. Students all across campus can be seen wearing a “Point Florida” t-shirts that they received for free at home matches this season.

The volleyball match experience has taken a complete 180 turn. Now instead of regular starting line-ups announcements, fans are treated to a pre-match on-court projection. When the lights come off it gets loud, setting the tone of the match even before the first serve.

Not only does Florida have a distinct pre-game tradition but it also has the best student section in America behind them. They call themselves the Rowdy Reptiles. You may have heard of them. They made a name for themselves with the Gators Basketball team. They were even named the 2016 NCSSA Student Section of The Year.

Now the student group is showing love for all of the sports around campus, especially volleyball. They are usually the first ones to enter the arena and the last ones to leave. After every big win, you’ll see the players run around the entire arena and take time to exchange high fives with their biggest supporters.

They are loud and proud and they will let you hear it. When Florida is dominating on the court they will be happy enough to tell you how much they are winning by with their “Two times your score” chant. You will see them wearing orange and blue overalls and holding up outrageous signs and the players absolutely love it.

In an interview, Paul Wassel, the president of the Rowdy Reptiles, emphasized that now is the time to get on board with women’s volleyball.

Make no mistake though, this relationship between the fans and the athletes is not a regular one. It’s as if both sides need each other.

The fans feed off the effort and energy the players show on the court and love to support their players. The players feed off the excitement and the admiration they get from the fans. They stay a little extra after every match talking to little kids and fellow Gators. Senior Shainah Joseph talked about how the fans are not just cheering for a person in a jersey but a friend. Sophomore Rachael Kramer says that the team notices how big of a crowd they have, especially when they are on the road.

Thank you! So sweet of you

The connection with the students doesn’t end with the players. Head coach Mary Wise has made it a point to develop a relationship with the fans. Staying extra to chat and always willing to take time out of her day to say thank you for your support. She isn’t talking to big-time boosters, she’s talking to college kids. 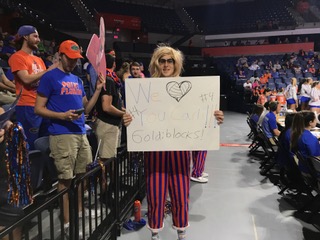 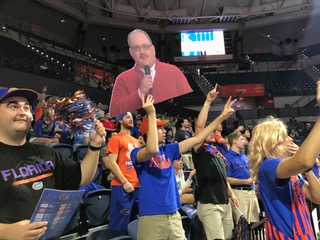 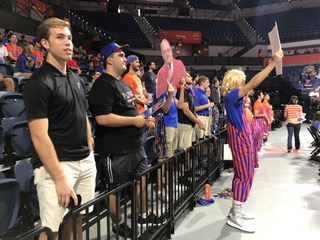 The biggest difference that Wise notices is the fact that the fans understand and appreciate the game of volleyball.

A year removed from playing in the Lemerand Athletic Center and the Gators are now two wins away from reaching the Final Four for the first time since 2002. Florida is four wins away from winning their first-ever national championship.

Even if the Gators are not the last team standing at the end there should still be a banner hanging from the rafters in the Exactech Arena.

2017, the year UF fell in love with volleyball.