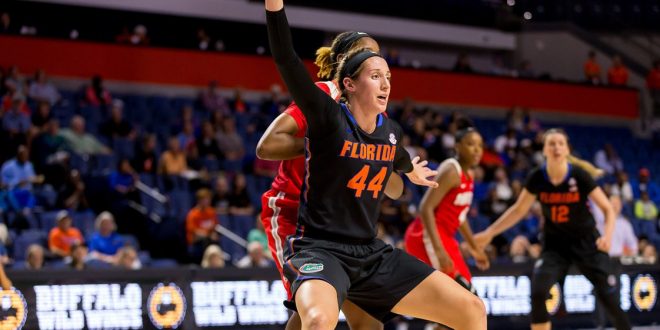 Following a major win on Sunday in Oklahoma, there was a positive vibe surrounding the Gator women’s basketball team. They were on a three game winning streak and were playing solid basketball. Then, No. 12 Ohio State came into Gainesville and humbled the Gators, beating them 103-77 on Wednesday, snapping the team’s three game winning streak. Wednesday’s loss provides the Gators another opportunity to go back to the drawing board and make some needed adjustments.

The Gators seemed to be in the holiday spirit Wednesday night as they kept giving the ball to Ohio State. The Gators turned the ball over 24 times. Most of the turnovers came on sloppy passes and mental mistakes. Ohio State thrived on the Gator miscues, converting them into 42 points. Gators head coach Cam Newbauer recognizes the inability to get stops after turning the ball against Ohio State. Another aspect that proved harmful in the turnover category was the Gators trying to match their opponent’s tempo. They were trying to match Ohio State’s playmaking ability and pace, which led them to turn the ball over numerous times. Junior guard Funda Nakksoglu says the turnovers were more on them than Ohio State’s defensive pressure.

Coming into Wednesday’s game, the Gators made a clear emphasis on slowing down Ohio State’s sharp shooting guard Kelsey Mitchell. Mitchell is prolific from beyond the three point line and not allowing her to get open shots was paramount. With all the attention on her, Mitchell launched a barrage on the Gators. Mitchell finished the game with 30 points on 12-22 shooting and 4-9 from distance. Coach Newbauer says that her presence on the court threw the Gators off their rhythm early. Mitchell is used to having a target on her back so Wednesday was no different. Mitchell says she just did what she could with what the Gator defense presented her with.

Finding bright spots in a game like this one is tough to do. However, one shimmer of optimism coming out of Wednesday’s loss was the Gators fighting spirit of the team. The Gators were taking every punch from Ohio State and were still standing. They even started to throw some punches of their own to make things interesting, especially in the third quarter. The Gators went on a 13-3 run midway through the third. A three pointer and one from forward Paulina Hersler brought the Gators within six. This was the closest the Gators came to Ohio State. The Buckeyes responded with a 12-2 run of their own to end the quarter. The Gators didn’t get close again. Nakksoglu says the run shows what happens when the team sticks with the game plan.

After every loss, the Gators view it as an opportunity to get better and improve. That sentiment will be reinforced after Wednesday’s loss. The Gators’ play inside the paint is a cause for concern. Florida was pounded in the paint on both sides of the floor. The Gators allowed 50 Ohio State points in the paint and were limited to only 28 points in the paint. This team has struggled at times to match the physicality of their opponents and getting the ball inside for efficient looks. Senior forward Haley Lorenzen describes what needs to be corrected after tonight’s loss. The Gators were in a similar situation after losing to Florida State. They would then rattle off four wins in their next five games. Coach Newbauer says this loss can be beneficial for the Gators.

The Gators look to bounce back on Sunday as they return to the O’Connell Center to host the Marshall Thundering Herd. Tip-off is set for 1 p.m. Sunday.