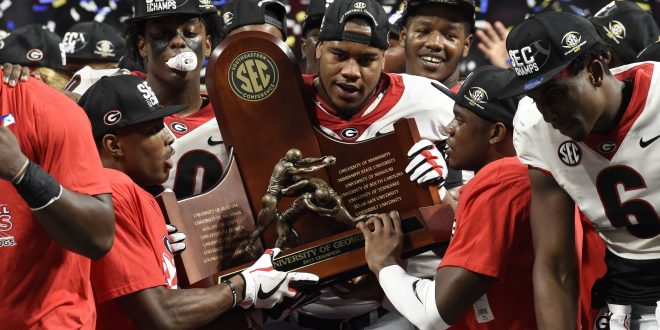 The top four ranked teams this season are Clemson, Oklahoma, Georgia and Alabama. No. 1 Clemson is scheduled to go up against No. 4 Alabama in the Allstate Sugar Bowl. Meanwhile, No. 2 Oklahoma will go head to head with No. 3 Georgia in the Rose Bowl.

But what about Ohio State?

Some football fans argue that Ohio should have been considered over Alabama. Alabama lost to their in-state rivals Auburn when the Crimson-tide were ranked No. 1. But, Alabama is still 11-1 when Ohio State is 11-2. If we’re just going by the numbers, Alabama deserves to be in the playoffs.

However, some believe winning a conference championship should be given more importance.  Consequently, the question on expansion remains.

POLL QUESTION: Should winning your Conference Championship be a requirement to qualify for the @CFBPlayoff

ESPN’s Brad Edwards explains why the college football playoffs might expand eventually but, it’s nothing to worry about for now.

It's time for an eight-team playoff in college football. Here's the solution from @DanWetzel: https://t.co/XsuYTzyBqd pic.twitter.com/4tcQwT0suA

As a former American football defensive back in the NFL, Edwards believes expanding the season will just increase the players chances in injuries.

In addition, Edwards acknowledges how location of playoff games will be a huge factor. He questions how fans will travel to a neutral base site for all playoff games.

Furthermore, Edwards thinks if it came down to money colleges would agree that the expansion on playoff games will be a huge benefit.

For now, we won’t see a college playoff expansion; but it’s still a possibility that we could see in the future, according to experts.