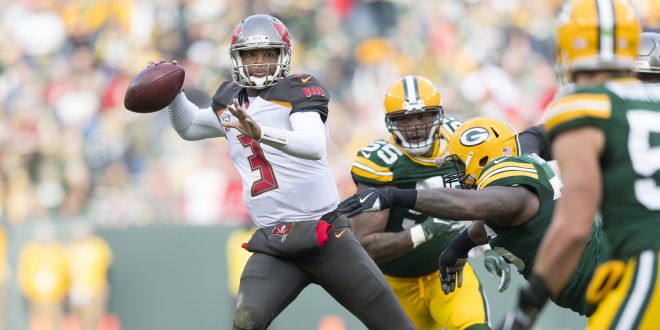 The Buccaneers have found themselves in a disappointing situation this season.  They came into the year with high expectations. Starting the season off 2-1, things looked bright for the Bucs early this year. After the first three games the Bucs went on a five game losing streak. Last week the Bucs lost to the hobbled Green Bay Packers team in overtime.

Although the Bucs lost last week they do have some positives to take out of that game. Jameis Winston had a solid outing. He earned his third highest passing percentage this year. Winston threw for two touchdowns and zero interceptions. His game wasn’t perfect though. Winston had a couple ill-advised throws that should’ve been intercepted. His only mistake on paper was a fumble late in the second quarter; returned for a touchdown. Despite his injuries, Winston is putting together a decent year. Right now Winston has a 90.1 passer rating and has thrown 2,190 yards. The stats are pretty good for Winston but it hasn’t translated to wins for the team.

On the running end of the spectrum, Peyton Barber took an incredible load of the carries. Barber ran the ball 23 times against the Packers for 102 yards. The player with the next most carries was Jacquizz Rodgers with only three touches.

The Bucs defense did make some plays in this game. Throughout the match up, the Bucs defense was constantly stopping the Packers on third down. Safety Justin Evans came down with an interception. However, Jamaal Williams went off with 113 yards and a touchdown. In crunch time the defense couldn’t stop the Packers run game. Aaron Jones took a 20 yard run to the house to defeat the Bucs.

In their match up with the Lions they should be expecting an offensive shootout. The Bucs will be looking to Winston for a turnover-less game. The run game will need to get going in order to open up shots down field. On the defensive end they will need to keep the Lions versitile backfield with Theo Riddick in check. Another issue is the Lions speedy receivers: Golden Tate and Marvin Jones Jr.

The Lions are coming off their biggest loss of the season. Detroit has won games against good teams. This loss last week to the Ravens stings. In the 44-20 routing Matt Stafford threw for 292 yards, one touchdown and one interception. It seems like Stafford’s whole career has consisted of him being under pressure. Stafford was sacked three times and fumbled on two occasions. One thing the Lions will look for in their next match up is to get the running game going. This will relieve pressure on Stafford. What their offensive line needs to focus on is keeping Stafford from getting hit. If the pocket begins to collapse, their offensive game plan will fall with it.

The Lions running game may suffer with Ameer Abdullah out with a neck injury. Theo Riddick poses a threat to defenses as more of a passing back. Rookie Tion Green will likely get a majority of the Lions runs with Riddick mostly being targeted in the pass. In their match with the Ravens they did not find much success in the run. Riddick on nine carries got 21 yards. Green on 11 carries got 51 yards. Right now the team is leaning solely on Stafford’s ability to get the ball to their elusive weapons in open field.

The biggest issue with the Lions last game was their defense. Joe Flacco threw for almost 300 yards and two touchdowns. There was absolutely no pressure on the offense. Flacco wasn’t sacked once in the game. The Ravens run game was going off as well. Alex Collins tallied 75 yards and two touchdowns. The Lions will need some major adjustments for their next game. Allowing 44 yards in an NFL match is almost certainly leading to a loss. Stafford commented on the teams approach:

The Bucs and Lions struggled with opposite issues in the previous match ups. The Bucs allowed both the quarterback and running back to post huge numbers on the run. Stafford won’t pose as much of a threat from the quarterback position with scrambling. If the Bucs want to win this game they need to bring the pressure on Stafford. The Bucs defense did great against the pass. This is Detroit’s strong suit. If Theo Riddick and Tion Green take some pressure off Stafford, we could see a standout performance from him. However, the stats from these teams last match ups show us this:

The Bucs are struggling against the run, but can survive against the pass. The Lions defense is allowing huge numbers to both the run and the pass. The pressure here is on the Lions defense to step up. Against the Packers, the Bucs thew for 230 yards and ran for 165. The Lions production on offense is not much weaker. They threw for 294 and ran for 78. The total yard aggregates are very close. The pressure lies on defense in this match up.

Tampa Bay is playing at home. They have proven to have a slightly better defense than the Lions. If the Bucs defense can contain Stafford and their speedster offensive weapons they will slowly outscore the Lions. On the other hand, if Stafford can get the ball to his weapons in open field, the Bucs will need another high production offensive game to compete. This is something that isn’t guaranteed with the Bucs inconsistent offense.

.@bucinsider and @Anthony_Becht discuss Sunday's game against the Lions on this week's Gameday Preview! pic.twitter.com/5yU2gWbGMi

Dylan Glicksman is a second year Sports/Media Journalism major at the University of Florida, out of Melbourne Beach, FL.
Previous Pruitt Named Head Coach at Tennessee
Next 2017 Heisman Trophy Preview