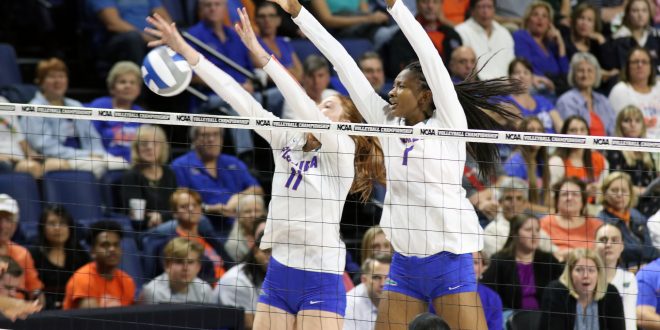 All season long the No. 3 Gators showed that they were elite, Friday night was no different.

Faced with adversity after losing the first set, Florida swung back in a big way winning three straight sets to defeat the No. 17 Bruins three sets to one. Carli Snyder led the Gators with a team-high 22 points. UF was dominant by the net as they had 14 total blocks compared to UCLA’s five.

It was a team effort as eight different Gators scored, three of them in double digits.

The Bruins gave the Gators their best shot in the first set as they went blow to blow.

UCLA got the best of the Gators winning a very close first set 25 to 23. Reily Buechler led the Bruins with a team-high seven points. She was even giving the Gators headaches on defense as she had four digs. Rhamat Alhassan’s best set came in the first as she had a team-high six points, five of which were kills.

Florida started to get in a rhythm in the second set as they won 25-17. Carli Snyder began to take over as she scored 7.5 points. The last thing an opponent can afford against the Gators are mistakes. UCLA made plenty of them in the second set as they committed 10 errors. This would be a common theme throughout the rest of the match as the Bruins committed 30 total errors.

UCLA has 27 errors compared to UF's 10. That right there is your difference ladies and gentlemen. #Gators

The Gators regained the set advantage in the third set and never looked back, winning 25 to 17. Quite frankly, it was the Shainah Joseph and Rhamat Alhassan show. Joseph scored 4.5 points thanks to her three kills and three block assist. Rhamat wasn’t letting the Bruins get in a groove as she had two kills and five block assist.

UF went on to punch their ticket to the Elite Eight in the fourth set. As she has done all season, Carli Snyder put the game away for Florida as she scored seven points in the final set. Allie Gregory was extremely reliable for the Gators as she had a six digs. The match ended with an emphatic kill by Shainah Joseph to give Florida their third 25-17 set victory of the night.

One Win Away From Kansas City

The Gators could not be heading into the Elite Eight any hotter as they enter the match riding a 14 match win streak. They will be playing the winner of the USC/Minnesota Sweet Sixteen match-up. Saturday’s match will be Florida’s 16th appearance in the regional championship.

The first serve will between the Gators and USC or Minnesota is will be at 6 p.m. at the Exactech Arena. The match will be televised on ESPNU.

Previous No. 5 Florida And No. 17 Cincinnati Set To Square Off In Never Forget Tribute Classic
Next No. 5 Gators Continue to Succeed Away From Home