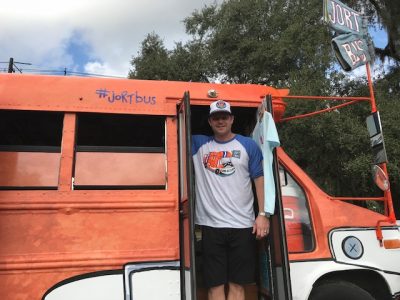 Nestled up in the Smoky Mountains, sitting in the eastern part of Tennessee is the city of Sevierville. It’s a small city, one that just over 16,000 residents call home, and one best known for being the hometown of country singer Dolly Parton.

Bates grew up in Sevierville and eventually went on to become an All-American linebacker his senior year (1991-92) at Sevierville High.

“I kind of had my choice of where to go to school,” Bates said.

So he visited Michigan, UCLA, Texas, and two SEC rivals: his home-state school of Tennessee, and their division nemesis, Florida.

Over in Knoxville, the Vols were going through a transition period. Longtime coach Johnny Majors was being replaced by offensive coordinator Phillip Fulmer after a string of SEC losses to close the ’92 season.

Things were different down in Gainesville. Steve Spurrier was entering his fourth season as Florida head coach after turning the program around. That included winning the schools first SEC title during the ’91 season and going to the first SEC Championship game in ’92.

Still though, going to Florida would be a big leap for anyone in a different SEC state, much more Tennessee. So what led him to Gainesville?

Whether you like it or not, learn to love it, because it's the best thing going. Woooo!! #GatorFootball pic.twitter.com/hY7FP4UPg3

“Coach Spurrier’s big line for the people from out of state was always, ‘You’ve got all these people that save up their whole lives, trying to turn 60 and move down to Florida and you have a chance to come right now and you’re 18.’ And it’s true. I was like, sign me up!”

So he decided to come down to Florida. And boy did he enjoy that decision.

He enjoyed it to the tune of four consecutive SEC championships. And in his senior season (1996), as a team captain, the linebacker from Tennessee helped bring Florida its first-ever national title.

Five rings in all. A heck of an experience made that much better by playing for the guy endearingly known as the Head Ball Coach.

“You hear the term swagger and swag, and I don’t even know if it was a real word back then, but he was swagger before swagger was cool.”

From being one of three linebackers on the field, Bates life now revolves around which one of his three main focuses he is involved in at the moment.

Bates studied telecommunications while at the University of Florida. He combined that with his good relationship with media into opportunities to call high school football. He then jumped around from Fox Sports Florida to CBS Sports, where he did play-by-play for the Mountain West.

Now he’s a color analyst alongside play-by-play man Wes Durham on the ACC Network. And while he’s not always calling what he calls “the sexiest game”, he believes his experience in the other chair allows him to know when to “maybe have a little bit of fun instead dissecting why it was a two-yard game.”

His best example of that actually came this season. In a video that went viral, a squirrel ran onto the field during the Louisville-Kent State game. Durham told Bates’ class that he leaves the antics to Bates, and Bates certainly let out all of his personality on the call.

Bates has translated his experience in the industry into a play-by-play class at UF. In this class, about 15-20 students learn everything from being comfortable in front of the camera, to learning about the different roles that the play-by-play person, analyst, and sideline reporter fulfill.

“Man, if I knew when I was in high school, when I was trying to decide on where to go to college, if I knew that there was a class offered, like the one I’m getting ready to teach, it would make whatever school, it would make Florida that much more attractive,” Bates said.

And students have soaked up the class.

“Just being around James, feeling some of his excitement and energy, really rubs off on you in a way that will help your career,” Lebron said.

In the interview below, Ryan Urquhart, a former student of Bates, talks about his experience in the class.

“It was everything that I hoped it would be and more,” Urquhart said. “…I gained confidence in knowing I can do something that I love doing.” If you look closely at the shirt Ryan’s wearing in his interview, you’ll see that it’s a folk-artsy looking drawing of a jort bus.

That “jort bus” and t-shirt are James Bates’ creations.

Among everything that Bates does, he says his art is the biggest avenue for his creativity.

He said he started by doing graffiti in middle school, and from there just kept drawing until he found his style.

Unique on the Canvas

His style has settled upon a funny, folk style that includes plenty of sports references. He’ll have funny quotes from Spurrier in one, to his bus and Tebow’s famous biblical-verse eye-black in another. His artwork wasn’t always like that though. Bates said he started off by doing landscape and portraits. However, he was then inspired by folk artist Howard Finster and his desire to tell stories about guys like Spurrier, just like he does in the booth.

“I started thinking about it more and more, just tying it in with my TV work,” he said. “I collect folk art, I collect Howard Finster’s pieces. I’m always reading about him, and he’s got all this text and these words all over all of his paintings. “I love some of these stories, Spurrier stories, and stuff, and I’m just gonna start telling some of my stories with the words on some of these paintings.”

Now, his artwork has taken off.

He was commissioned for a piece in UF President Kent Fuch’s home. He designed the souvenir cups sold at Ben Hill Griffin Stadium and designed the shirt given to student season-ticket holders for the 2017 season.

For Bates, at the end of the day, no matter if it’s his art, his play-by-play, or his teaching, it all comes back to one principle: happiness.

“I’m just so blessed on so many fronts, that I kind of feel like I’m slapping God in the face if I’m not a happy person and a positive person and trying to make other people smile and other people’s days better.”

Native New Englander. Follow me on Twitter: @jonacosta_10
@jonacosta_10
Previous SEC Power Rankings: Part 3…With Tiers!
Next The Ones Who Defied the Odds: Top 10 Undrafted NBA Players of All Time