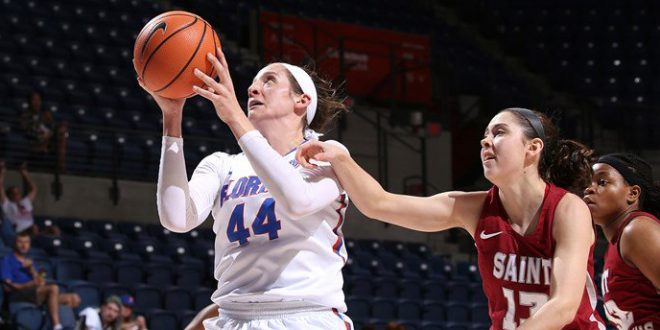 After another break from play for Christmas, the Florida Gator women’s basketball team returns to a normal schedule. The Gators return to action Wednesday afternoon as they host Delaware State. This will be the final non-conference game of the season for the Gators.

Throughout the non-conference part of the schedule, the Gators have shown the ability to correct mistakes between one game and the next. Wednesday’s game against Delaware State will be the Gators’ last opportunity to get things adjusted before SEC play begins. The starters have been the life force for this team through the first 12 games. All five starters are averaging double figures in points. One area that could help the Gators, which could be addressed Wednesday, is bench play. Several games this year, the bench has combined to get only a few baskets. Injuries haven’t helped with the bench production. Wednesday could be a prime opportunity for the young supporting cast to gain valuable game experience and reps before SEC play.

Senior forward Haley Lorenzen has cemented herself as one of the most decorated players in Gator history. Throughout this season, Lorenzen has climbed the ladder in many categories in the Florida record books. When Lorenzen steps on to the court at Exactech Arena Wednesday afternoon, she has realistic possibility to do something really special. She is seven points shy of the 1,000 point mark. Only 24 Gators have reached that milestone. Lorenzen’s former teammate Ronni Williams achieved the feat last year. Lorenzen could join her old teammate in that exclusive club as early as Wednesday.

Delaware State isn’t having the best start to the 2017-18 season. After winning their season opener against Longwood by just four points, the Hornets have lost every game since. They come in with a record of 1-9 and without their star player. Delaware State junior forward Najai Pollard is out with a knee injury. Pollard was named as the Mid-Eastern Athletic Conference (MEAC) Preseason Player of the Year. The Hornets lost their last game to Michigan 105-36. Delaware State comes into Gainesville averaging 53.7 points a game on 32.3% percent shooting. The Gator defense can really focus on the details on the defensive end against the Hornets. Without Pollard, the Gator bigs should be able to crash the boards with ease.

The Gators will host the Hornets in the final game before getting into SEC play Wednesday afternoon. Florida and Delaware State will tip-off from Exactech Arena at 2:00 p.m.