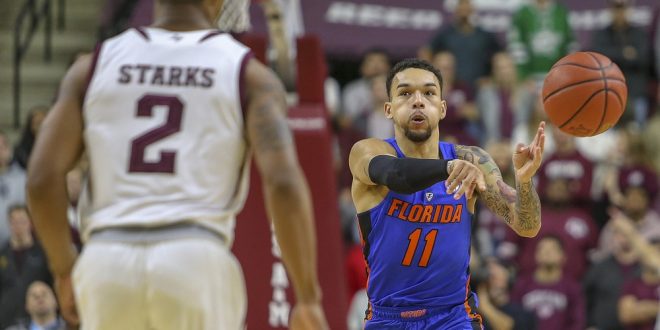 Just when it seemed like the Gators were going to cool down from beyond the arc, they continued to hit three-pointers. Florida cruised to an 83-66 victory over the No. 11 Texas A&M Aggies on Tuesday night in College Station. Keith Stone contributed a career-high 18 points on 7-14 shooting. Egor Koulechov led the team with 19 points while sinking 5 of 6 attempts from beyond the arc. The Gators tied their season-high in three-pointers, knocking down 17 of 28 (61%) shots from long-range.

Florida held NBA-bound big men Tyler Davis and Robert Williams III to a combined 24 points and 18 rebounds on 43.5% shooting. The Aggies outrebounded the Gators, 39-29, and 26-12 in the second half. Florida turned 16 Texas A&M turnovers into 16 points and recorded 25 assists on 33 made shots. UF led for 37 minutes and 23 seconds of the contest. Keith Stone and KeVaughn Allen paced the Gators with a team-high +19 rating.

The Gators will have three days off before taking on the Missouri Tigers in Columbia on Saturday, January 2 at 1 p.m. Mizzou is ranked in the top 50 nationally in two-point percentage, three-point percentage and free-throw percentage.

The Gators jumped to an 11-9 lead at the under-16 minute media timeout. Florida hit three of their first five shots from beyond the arc, while the Aggies sunk four of their first six attempts from the field. UF did a solid job of double-teaming Tyler Davis and Robert Williams III early in the contest.

Florida extended their lead to eight at the under-12 minute media timeout. The Gators had a tough time defending the Aggies in the post early, as 12 of Texas A&M’s first 15 points came in the paint.

A 22-6 run extended Florida’s lead to 30-15 with just under 9 minutes remaining in the first frame. The Gators opened six for nine from three-point range.

Texas A&M pulled back within single digits following a 7-0, 42-second run. 20 of the Aggies’ first 24 points came from within the paint.

Keith Stone continued his hot start, scoring his 13th point with 4:25 remaining in the first twenty minutes. Florida notched 12 assists in the first 16 minutes of the game.

Florida ended the half on a 13-6 run, taking a 46-30 lead into the locker room. Keith Stone led all players with 13 points in the first half, while Egor Koulechov added 11 points on 3-3 shooting from beyond the arc. The Gators held Robert Williams III and Tyler Davis to a combined 9 points and 4 rebounds in the first twenty minutes.

KeVaughn Allen’s three-pointer at the 17:29 mark of the second half extended Florida’s lead to 16, their largest of the game up to that point.

Back-to-back three-pointers brought Texas A&M back within 10 points of the Gators with 13:31 left in the contest. The Aggies opened the second half 6 for 11 from the field.

Eight straight points from Egor Koulechov and a lay-up from Chris Chiozza put Florida up by 20 for the first time in the game. The Gators led 65-45 with just under 11 minutes to go in the tilt.

A three-pointer by Keith Stone with 8:20 left in the game gave the redshirt sophomore a new career-high in scoring. The basket notched Stone’s 18th point of the game. The Gators led 71-50 with 7 minutes left in the contest.

TAMU ended the game on a 13-8 run, but the Gators won the contest 83-66, taking down their third ranked opponent this season.