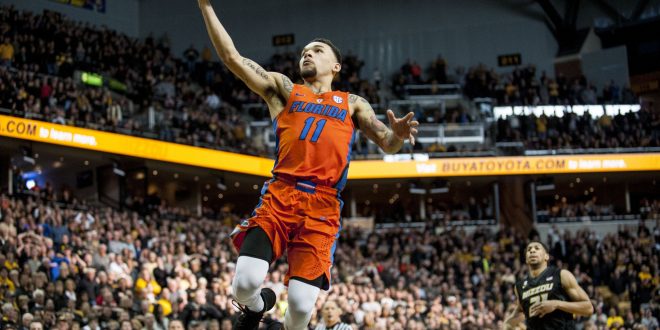 The legend of Chris Chiozza added another volume as the senior’s game-winning scoop-and-score sealed a 77-75 victory for the Florida Gators over the Missouri Tigers in Columbia on Saturday afternoon. Chiozza scored all 13 of his points in the second half, adding 6 assists throughout the contest. The Gators ended the game on a 7-0 run in the final minute and 10 seconds.

Missouri’s Jordan Barnett finished with a career-high 28 points on 8-13 shooting from the field, sinking 6 of his 9 attempts from beyond the arc. Keith Stone added 9 points in the second half, scoring 13 total points. Jalen Hudson led Florida with 16 points, despite playing only 27 total minutes.

Kevarrius Hayes’ defense was key for the Gators, as the junior center finished with four total steals. Hayes has now recorded 10 blocks and 5 steals in the team’s past three games. He also notched 10 points and 8 rebounds vs. Missouri.

“The Gators have won the game, OH MY.” pic.twitter.com/kodlgkzPys

Gators basketball gears up for weekend