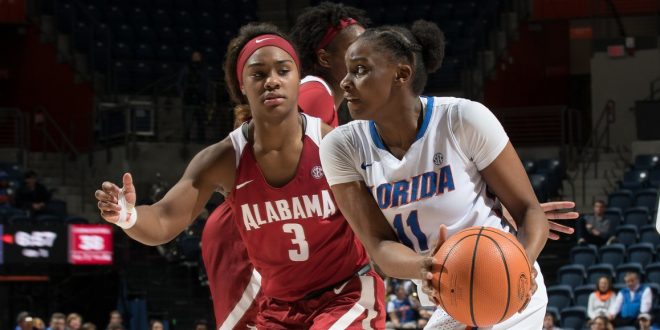 The first two attempts for the Florida women’s basketball team in getting its first SEC win of the season didn’t go the way the team hoped. Two fourth quarter collapses separated Florida from a 2-0 conference record. Third time could be the charm for the Gators in getting that first conference win. The Gators travel to Oxford, Mississippi to face the Ole Miss Rebels Sunday afternoon.

In the last two losing performances, the Gators have failed to finish the game. Whether it was being outscored 30-4 against Auburn or allowing an 11-0 run to Alabama, the team has struggled to finish a game strong. Gator head coach Cam Newbauer addressed this growing concern following the latest poor ending against Alabama; he says the cause of these late game collapses is that, “too many times we rely on our offense to dictate our defense and we have to stop that.” For Florida to maintain leads late in games, it has to come down to defense. The team has failed to make key stops down the stretch and it has shown. If the Gators want to break the losing streak Sunday, defense will have to maintain any lead the Gators can get in the fourth quarter.

Another reason Florida has struggled to close games out has been the workload being placed on the starting group. Each starter is playing over 30 minutes almost every game. The bench is playing very small amounts of minutes. Sophomore guard Sydney Searcy played the most minutes off the bench with 13. When the bench players are out on the floor, they aren’t producing as much as other teams. In the loss to Alabama, Florida reserves were outscored by Alabama’s 20-2. The Gator bench has been hurt due to injuries and players sitting out and UF is still hoping for one of the reserves to step up in a larger role in the offense as SEC play continues.

Ole Miss, like Florida, is still searching for the first conference win of the season. The Rebels lost their first two games of SEC play. Ole Miss lost a heartbreaker in the opener to Arkansas, 73-72. Then the Rebels were demolished by defending national champion South Carolina, 88-62. Led by head coach Matt Insell, the Rebels come into Sunday’s game with Florida with a 10-5 record. Ole Miss draws a lot of their offense from the charity stripe. The Rebels are ranked 10th in the country in free throw attempts. This doesn’t bode well for Ole Miss against Florida, who is ranked second in limiting fouls. The Gators average just 12.4 fouls a game.

Both the Gators and the Rebels hope to capture their first SEC win of the season as the two teams square off Sunday afternoon. Tip-off from Oxford is set for 3:00 p.m.