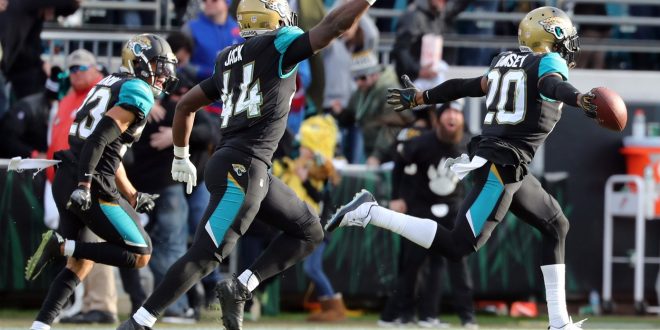 Jaguars get first playoff win since 2007 behind stellar defensive performance

The Jacksonville Jaguars outlasted the Buffalo Bills on Sunday afternoon by a score of 10-3  to advance to the AFC Divisional round.

The Jaguars won this game the same way they have been winning games all season: with their defense. The Jags entered this game ranked first in the NFL in rushing yards allowed per game, sixth in total yards allowed per game, and fifth in points allowed per game. On Sunday, the Jacksonville defense put up one of their best performances of the season. The Jags’ defense allowed just three points and 263 total yards despite Buffalo having the ball for almost 33 minutes compared to Jacksonville’s 27 minutes. The defense came up two interceptions had timely stops all game, including a goal-line stand from the 1-yard line to hold Buffalo to a field goal on the Bills only red-zone trip of the game. The Jaguars picked off Tyrod Taylor in the first quarter for their first interception. CB Jalen Ramsey came up with the game-clinching interception with 32 seconds remaining.

While the Jaguars’ defense had an elite performance, their offense had quite the opposite. Besides the team’s 86 yard touchdown drive in the third quarter, their longest drive was for only 27 yards. The Jags put up just 230 yards of total offense and gained only 15 first downs. The team converted just two of their twelve third-down attempts. Jaguars’ quarterback Blake Bortles completed 12 of his 23 passing attempts for a season-low 87 yards and a touchdown. Bortles did find some success on the ground, rushing for 88 yards on 10 attempts.

Blake Bortles said that the defense “had our back” and that the offense needed to find ways to be more efficient going forward.

The Jaguars face the Pittsburgh Steelers this Sunday as they look to advance to the AFC championship for the first time since 1999. Jacksonville dominated Pittsburgh in their regular season match-up, winning 30-9 due to five interceptions from Ben Roethlisberger. The second matchup between the two teams will probably be tougher for the Jags due to Pittsburgh’s first-round bye and the return of Antonio Brown.

Jaguars and Steelers kick off at 1:05 p.m. Sunday afternoon.