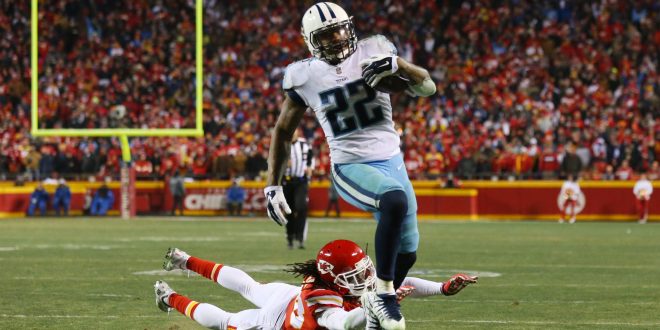 On both sides of the NFL playoff bracket, the top-seeded teams will welcome a wild card team in the divisional round this weekend. The Tennessee Titans and the Atlanta Falcons, both sixth seeds, came out victorious during Wild Card Weekend. Each team won in different ways. The Titans pulled off a come from behind win. The Falcons, trying to redeem themselves from a collapse in last year’s Super Bowl, won in full control due in large part to their defensive tenacity.

A Comeback To Remember

The Kansas City Chiefs came into their Wild Card matchup with the Tennessee Titans looking to erase some playoff disappointment. The Chiefs hoped to win their first home playoff game since 1996. The Titans, after losing their final two games of the season, were aided by other playoff contenders losing, allowing them to sneak into the postseason. This led many to believe that the one time undefeated and unstoppable Chiefs would dominate the Titans at home. It looked that way through the early stages of the game. The Chiefs stormed to a 14-0 lead after the first quarter.

The Titans gained a glimmer of hope thanks to a 49-yard field goal from kicker Ryan Succop, a former Chief, to put the game at 14-3. The Chiefs took a commanding 21-3 lead as the first half expired thanks to Smith’s second touchdown pass of the day, this time to former Gator and current Chiefs wide receiver Demarcus Robinson. This Wild Card game was going exactly as many people thought. Then, the second half went in a way no one saw coming. The Titans thundered down the field, on a drive lasting 8:29. The drive was capped off by the improbable. On third down, Titans quarterback Marcus Mariota had his pass deflected by Chiefs cornerback Darrelle Revis and sent back to Mariota, who caught the deflection and scored. Mariota describes what happened on that play.

With the Chiefs reeling, the Titans continued the charge. They cut the Kansas City lead to five thanks to a 35-yard touchdown run from Titans running back Derrick Henry. The Titans completed the comeback with Mariota touchdown pass to wideout Eric Decker with 6:05 remaining in the game. Tennessee’s 22-21 win was the first playoff win for head coach and former Gator Mike Mularkey.

The Atlanta Falcons return to the playoffs with the goal of erasing the embarrassing 28-3 meltdown in last year’s Super Bowl. The first step on the mission for redemption came in Los Angeles against the upstart Rams. The goal for Atlanta was to slow down the explosive Rams offense, led by the much improved second-year quarterback Jared Goff and MVP candidate running back Todd Gurley. Both teams failed to punch it in in the first quarter with Falcons getting on the board twice with two field goals from kicker Matt Bryant. The Falcons built their lead with the first touchdown of the game courtesy of running back Devonta Freeman. The Rams ended the half with 10 unanswered points.

The defenses continued to stand out in slowing down these two potentially explosive offenses. The Falcons defense, in particular, did an exemplary job in slowing down Gurley. The Falcons focused on tacking Gurley in the open space and preventing him from becoming a threat in changing field position. In the third quarter, the only scoring came from the Falcons kicking game. Bryant hit two field goals, including one from 54 yards out. A Rams field goal brought the Rams within one possession. Then, Matt Ryan connected with wide receiver Julio Jones in the red zone for the game-sealing touchdown. The Rams marched down the field in desperation, but couldn’t make the game close. The Falcons came out victorious 26-13.  After the game, Ryan said the Falcons are set on making a deep postseason run.

Onto the Next One

Both of the remaining Wild Card teams will play their Divisional Round games on Saturday. The Falcons will kick off the weekend with their road contest with the top-seeded Philadelphia Eagles. Kick-off from Philadelphia is set for 4:35 p.m. Following that game, the Titans have a daunting game with the defending champion New England Patriots in Foxborough. Kick-off for that game is set for 8:15 p.m.