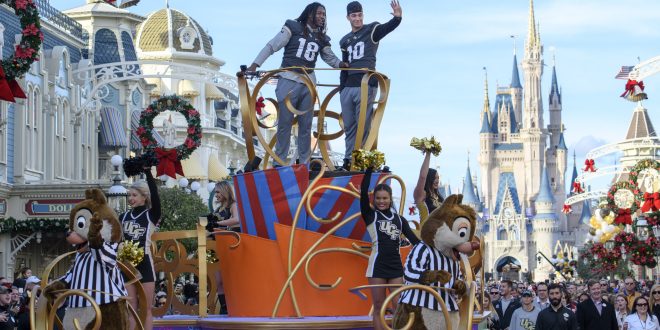 Who is the National Champion?

Now obviously the Knights aren’t actually National Champions, but they really do believe they are. The Knights feel that they weren’t given an opportunity to even compete for a national championship because of the college football playoff only having four teams. They feel that because they are members of the American Athletic Conference, a non-Power 5 conference, that they weren’t given the respect that they deserved. The Knights were ranked low the entire season and weren’t even considered to be in the college football playoff because of their lack of a “strong schedule”

The Peach Bowl, The Straw that Broke the Camel’s Back

The one game that pushed the Knights to believe that they were national champions was the win over Auburn in the Chick-Fil-A peach bowl on New Year’s Day. The Knights defeated a member of the SEC, Auburn with a final score of 34-27. Auburn defeated Georgia, and Alabama earlier in the season. This is why UCF believes they’re national champs because they beat Auburn in their bowl game.

UCF felt that their team deserved the opportunity. So, they still gave their team the national championship treatment. On Sunday, the Knights had a parade at Walt Disney World in Orlando, which isn’t too far from UCF’s campus. Right in front of Cinderella’s castle, thousands of UCF Fans came to celebrate the Cinderella team, who wasn’t invited to the big dance. Fans filled the park in Black and Gold while the players and staff were celebrated.

UCF Still the Team to Talk About

The national champion campaign was brought to the national stage mainly by UCF athletic director, Danny White. White has spoken on his team’s achievements and the unfairness of the college football playoff on ESPN, several different newspapers, and many other media outlets. Doing this has kept UCF in the public and has caused people to still talk about this team. “He’s used the platform to talk about the year UCF has had, the system he believes to not give this group a fair shake, and to answer questions for people saying to schedule tougher. He’s done that to sell the message” UCF play by play announcer Marc Daniels says.

It’s highly unlikely that a game will be scheduled after the actual national championship for UCF to play. But it is no question that UCF is a team that has really caused conversation and has highlighted the flaws in the college football playoff selections.