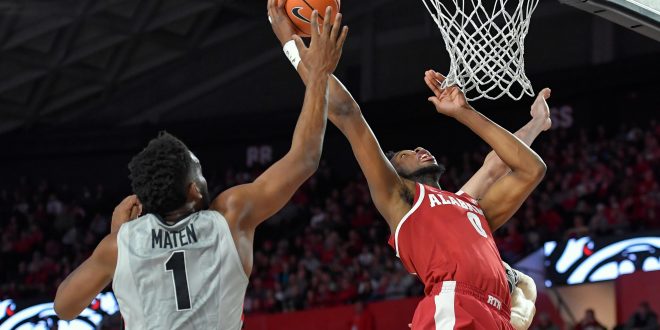 The Missouri Tigers take on the Georgia Bulldogs at the Mizzou Arena Wednesday night. This will be the first and only matchup between the two teams during conference play this season.

The two teams haven’t faced each other since their single conference game last season. Georgia beat Missouri 71-66 after overcoming a 6-point halftime deficit. Both teams look to climb up the SEC rankings early on in the season.

After taking down South Carolina in Columbia in their SEC opener, the Tigers fell short against Florida in their home conference opener this past Saturday. They lost 77-75 to the Gators after a steal ended up as a last-second layup for Florida. The Tigers look to bounce back and win their first SEC home game when they take on Georgia.

Despite losing, there were some positives for Missouri (1-1). Senior forward Jordan Barnett notched a career-high 28 points, including another career-high 6 three-pointers made. Senior guard Kassius Robertson ended with double-digit scoring for the 5th straight game.

Mizzou remained dominant in the paint, outrebounding Florida 32-30. The Tigers have outrebounded 13 of the 15 opponents they’ve faced this season. It remains clear that to beat Georgia, they will have to play their game in the paint and outrebound the Bulldogs as well.

Unlike Missouri, Georgia (2-1) is coming off two straight wins after having lost their conference opener to Kentucky. The Bulldogs come to Columbia after having thrashed Alabama 65-46 and outperforming them in every facet.

Georgia’s defense stepped up as they held Alabama to only 46 points (their lowest this season).

Like Missouri, Georgia also had a big performance from their senior forward. Yante Maten scored 26 points against the Tide, making it his 14th straight double-digit game.

You can catch the SEC matchup between Missouri and Georgia on Wednesday night at 9 PM on ESPN2.