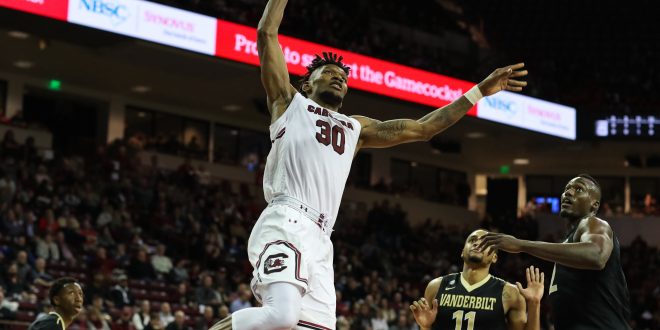 The Alabama Crimson Tide will host the South Carolina Gamecocks’ basketball team on Tuesday night. The Tide will begin a stretch of playing five of its next seven games under the Coleman Coliseum.

This will be the only meeting between both teams this year. Last year Alabama won at South Carolina in a quadruple-overtime thriller, 90-86. =The Tide would go on to win again in the SEC Tournament quarterfinals, 64-53.

The Gamecocks got their first SEC game of the season on Saturday with a career performance from forward Chris Silva. Silva lead the Gamecocks with a career-best 27 points, hitting nine baskets and posting a 9-of-12 mark from the free throw line. Silva ranks third in the SEC with 14.6 points per game.

When asked how important Silva is for the Gamecocks Head coach Frank Martin didn’t hold back in mentioning he is a major key to their success.

South Carolina will begin a tough stretch, playing two on the road this week before returning home for two games the following week. The Gamecocks are averaging 67.0 points per game, and are 10-5 overall, 1-2 in the SEC.

The Crimson Tide have dropped back-to-back games for the first time this season with a 76-75 loss to Vanderbilt and 65-46 loss to Georgia. Alabama is averaging 74.9 points per game and outscoring the opposition by 4.3 points.