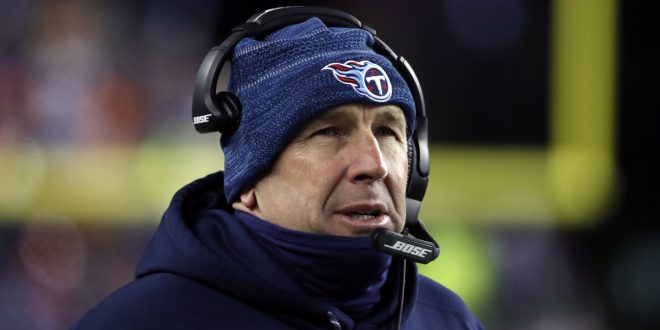 The decision comes following the Titans exit from the playoffs after falling to the New England Patriots 35-14 in the AFC Divisional Round.

#Titans GM Jon Robinson and CEO Steve Underwood told coach Mike Mularkey before the game and told him they were extended him and he was their guy. They said they'd get it done after the game. Now this.

That loss may not have been the only reason for the separation though.

According to ESPN, the Titans had discussed extending Mularkey. However, those talks ended because they couldn’t “come to an agreement over the future.” Part of that was the Titans wanting to continue with Mularkey, but wanting to make other changes to the coaching staff.

He also led Tennessee to its first playoff win since 2003 by beating the Chiefs 22-21 two weeks ago in the AFC Wild Card Round. That makes Mularkey the first coach to be fired after winning a playoff game since San Francisco fired Steve Mariucci in 2002.

That may be in part because of a desire from the Titans to get more out of their young offense.

Jon Robinson: "I felt like we need to go in a different direction and maximize the skill sets of the players on the field." He spoke specifically to Marcus Mariota's development and numbers not supporting Mularkey's claim that the development has been good.

With young pieces like Marcus Mariota, Derrick Henry, and Corey Davis, the Titans are looking for more progression on offense. That’ll be necessary as they look to contend in the AFC for years to come.