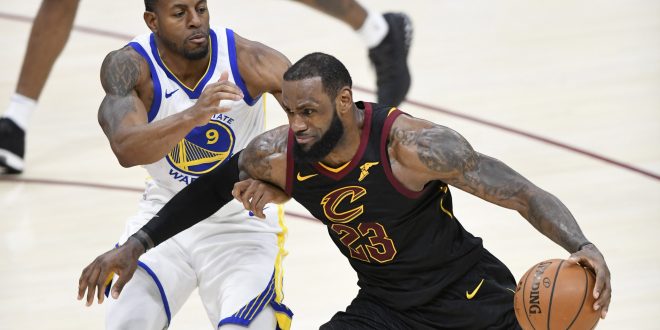 The battle continues as the Golden State Warriors defeated the Cleveland Cavaliers Monday night 118-108. The Warriors continue their streak of winning 13 on the road games. Both Kevin Durant and LeBron James finished with a total of 32 points each.

Every dunk from @warriors and @cavs action in Cleveland! pic.twitter.com/jxbsNjFuOZ

This was Golden State’s second straight win against the Cavs this season. Durant scored a total of 32 points, had 8 assists and 5 rebounds. Stephen Curry added 23 points, while Draymond Green totaled 11 points, had 9 assists and 16 rebounds.

The Cavs trailed behind by just 2 (93-91) entering the fourth quarter, but the Warriors were too hot. Cleveland ended up missing 17 out of 19 shots and it all went down from there.

Head Coach Steve Kerr says he was upset with the his team defensively during the first half.

However, Coach Kerr says his team’s defense in the 4th was the turning point of the game.

Both Durant and Curry also mentioned the 4th quarter was when the team showed up. Durant says the energy was much different.

The Warriors take this one.

The Cavs were up at the half by 7 (64-57) but couldn’t hold onto the lead. LeBron James was Cleveland’s leading scorer of the game ending with 32 points, 8 rebounds and 6 assists.  Kevin Love was right behind him adding 17 points for the Cavs.

Meanwhile, Isaiah Thomas played for the first time as a Cavalier against the Warriors scoring 19 for Cleveland. This is the most Thomas has scored in the past five games after recovering from hip surgery.

LeBron James says it was a slow start for the Cavs in the 4th quarter and they need to get better.

Both teams have met in the finals for the past three years, Golden State winning 2-3. The question is, will there be a fourth?

The Warriors will continue to stay on the road as they go up against Chicago on Wednesday. Meanwhile, the Cavs will host the Orlando Magic on Thursday. However, the Magic beat the Cavs earlier this season in Cleveland.