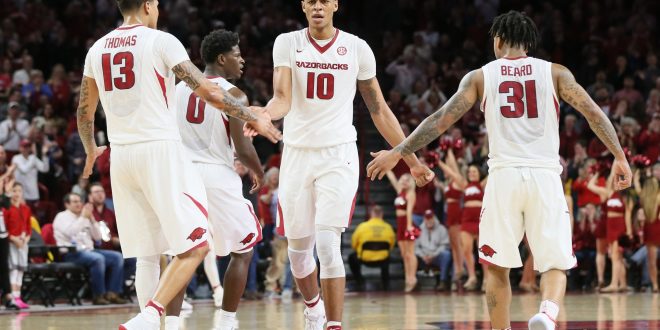 The University of Arkansas men’s basketball team faces the Florida Gators Wednesday night for their fourth road game. Both the Razorbacks and the Gators are 12-5 this season, although the Razorbacks are yet to win an away game.

The Razorbacks have lost 12 straight games in Gainesville. But on Wednesday they have a chance to snap a seven-game losing streak to Florida. The Razorbacks are hungry for their first conference road win of the year, especially after winning six SEC road games last year. Arkansas finished third in the SEC last season, with a 26-10 record, in which two of the 10 losses were to Florida.

Razorback defense has allowed teams to put up major points on the board. Arkansas allowed the Tennessee Volunteers to score 93 points against them, and Oklahoma scored 83.

University of Arkansas Director of Basketball Operations, Matt Zimmerman says the Razorbacks must improve on their defense in order to beat the Gators.

On Saturday, Arkansas not only defeated SEC rival Missouri, but defense only allowed them to score 63 points. This was the lowest score they allowed since the Razorbacks first game when they beat Samford University 95-56.

“So far this year, they are 0-3 on the road, and Florida is a tough place to go in and think you’re gonna get your first win,” Zimmerman said. “But that’s what the Razorbacks are faced with.”

The Razorbacks who average 85 points a game have struggled their past four games. Only scoring 65, 54, 77 and 75 points against SEC teams. Zimmerman says the team is most successful when they utilize three Senior guards: Jaylen Barford, Daryl Macon, and Anton Beard.

“Jaylen Barford is the only player in the SEC to rank in the top three in points per game (3rd) and field goal percentage (3rd),” according to ArkansasRazorbacks.com. “Daryl Macon is one of two players in the SEC with four games of 8+ assists this season. In those four contests, he has totaled 32 assists and just six turnovers.” 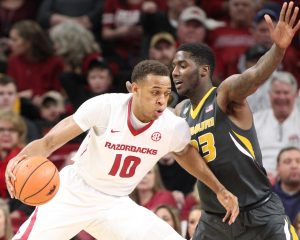 Arkansas plans to capitalize on their star players Wednesday. Zimmerman says they must shoot better when at the line.

They make 67 percent of their free throws.

Kate Venezio is a fourth-year telecommunication-news student at the University of Florida. Kate does it all: Behind the camera she captures emotional moments as a photographer for the University of Florida Athletic Association. She's comfortable being in front of the camera, too. Kate interviews players, coaches, fans and family members for pre- and post-game coverage as a beat reporter for ESPN Gainesville/WRUF-FM. In addition, Kate produces the sports segment for the weekly WUFT News program. There, she's responsible for writing the script in its entirety to include production commands. The presentation includes video highlights and interviews taped and edited, and Kate then live anchors the final package on a daily deadline. In addition, she writes stories for wruf.com where she informs sports fans of local, state, and national trending topics. Kate also utilizes social media as a tool to help get the stories in front of viewers.
@@kate_venezio
Previous Preview: Georgia and LSU look to get back in the win column
Next Magic Defeat Timberwolves to Stop Skid