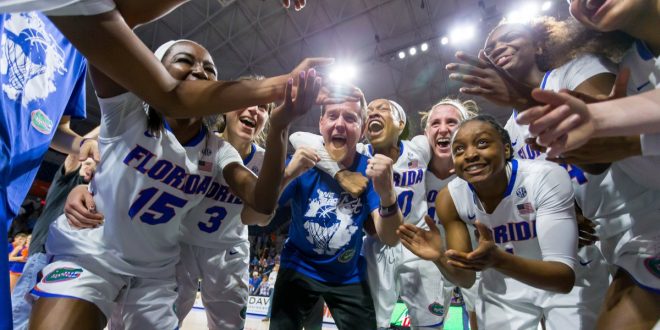 Heading into the fourth quarter, the Gators were faced with an uphill climb. In the third quarter, the Gator defense allowed Ole Miss to pound the ball inside and basically do whatever they wanted on the offensive end. Florida had their backs against the wall. Just like they have done all season, the team continued to fight. The Gators fought their way back and took the lead with a put back from senior forward Haley Lorenzen with just seconds remaining. Lorenzen would seal the comeback with a block on the following possession, giving the Gators the 61-60 come from behind win over Ole Miss.

When the Gators came out of the fourth quarter, the message from head coach Cam Newbauer to his stayed the same: keep fighting. With the Gators on the ropes, Florida came out to start the fourth quarter swinging and slowly chipping away at the lead. A jumper from Florida guard Funda Nakkasoglu and a jumper in the paint from forward Paulina Hersler opened the quarter for the Gators. This cut the Ole Miss lead down to nine. Then, Florida started to “chuck it from the cheap seats”. A three from Nakkasoglu cut the lead to six. Then, as the shot clock started to expire, Lorenzen threw up a prayer from beyond the arc. She connected from the top of the key and made it a one possession game.

After converting on a wide open layup to make it a 1 point game, sophomore guard Delicia Washington would put the Gators on top with a crossover jumper with 3:22 remaining. Lorenzen would extend the Gator lead to 3 with a layup. After the Rebels reclaimed the lead, Lorenzen would make two major plays to complete the comeback. Off a Washington missed three pointer, Lorezen was in the right spot for the rebound and easy lay in. This gave the Gators a 61-60 lead with 29.2 seconds remaining. On the next Ole Miss possession, the Rebels put the ball in Shelby Gibson’s hands. Lorenzen got her hand on Gibson’s layup to block the shot and preserve the victory. The block led to an eruption from the Gator fans. Lorenzen described what happened on that play. A successful inbound pass from Florida guard Dee Anderson to Washington made the comeback win official.

For the second straight game, the Gators were dominant on the glass. Florida outrebounded Ole Miss 43-24 in the game. The Gators had 15 rebounds in the final quarter alone. Allowing offensive rebounds was something the Gators allowed on the regular earlier this season. Against the Rebels, they only allowed Ole Miss to pull down 7 offensive rebounds. Newbauer said that this was a major key to the Gators coming away with the win. The rebounding effort allowed Florida to record 14 second chance points, with 8 coming in the fourth quarter. The game winning layup came on a second chance shot. Florida senior forward Paulina Hersler said the key for the dominance was just boxing out. Lorenzen said the team has come a long way in terms of rebounding.

This season, Delicia Washington has developed into a consistent force for the Gators on both sides of the ball. That development was on full display with her performance against the Rebels Sunday afternoon. Washington finished the game with 15 points and 10 rebounds. She had a hand in several key plays in the fourth quarter to help the Gators capture their second straight SEC win. Her biggest impact on the court, however, probably came outside the box score. She was hyping up her teammates in the huddle and being a leader. According to Washington, this is something she has worked on this season. Her development into a leader is something her teammates have noticed. Lorenzen said she’s very proud of her teammate becoming a leader.

Feeding Off The Crowd

The Florida faithful was treated to a thrilling game Sunday afternoon. The game was able to go in Florida’s favor due in large part to the fan’s influence on the game. When the Gators were making their comeback in the fourth quarter, the fans became loud and vocal. They erupted every time the Gators were able to hit a big shot and cut the Ole Miss lead. They made things difficult for the Ole Miss offense, making an insane amount of noise. Newbauer was even encouraging the crowd to get loud from the sideline. The fans almost blew the roof off the O’Connell Center twice. First when Lorenzen’s put back gave Florida the lead. Then again when Lorenzen blocked the shot that sealed the win. The atmosphere inside Exactech Arena Sunday afternoon was the loudest it has been all season. After the game, Newbauer said that this turning point win possible because of the Gator fans.

The road dosen’t get any easier for the Gators. Florida faces last year’s national finalist and this year’s third ranked team in the country Mississippi State on the road Thursday night. Thursday starts a six game stretch that includes meetings with Mississippi State (twice), No.11 Missouri, No. 10 South Carolina and Georgia.

Previous Florida Takes Down No. 18 Kentucky 66-64 At Rupp Arena
Next Jaguars fall short of Super Bowl in loss to Patriots