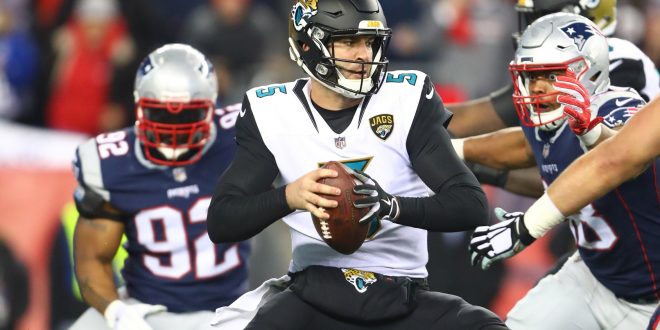 Jaguars fall short of Super Bowl in loss to Patriots

In an effort to clinch their first-ever Super Bowl appearance, the Jacksonville Jaguars couldn’t overcome a fourth-quarter rally from Tom Brady and the New England Patriots on Sunday. Jacksonville led for most of the game, but allowed two late touchdowns, falling 24-20 on the road in the AFC championship.

Despite the loss, the Jaguars finished the season with a 10-6 record, an AFC South title and an appearance in their first conference championship game since 1999.

The Jaguars came into the day as the leader in rushing yards per game, averaging 140 during the postseason. But Jacksonville quarterback Blake Bortles opted to pass for the first touchdown of the day. Bortles threw a short pass to tight end Mercedes Lewis to put the Jaguars up 7-3 early in the second quarter. That would be Bortles’ only touchdown pass of the day.

It didn’t take long for the Jaguars to strike again, though. Jacksonville acted quickly and ended their next drive with a touchdown. Running back Leonard Fournette took the handoff from Bortles and ran the ball up the middle, bulldozing his way into the end zone. His touchdown put the Jaguars up by 11, leading 14-3 in the second quarter.

Oh my. @_Fournette CANNOT be stopped.

The scoring wouldn’t stop there, though. After two-straight drives ending with a punt, New England closed the gap on Jacksonville’s lead. Running back James White took the opportunity of an open gap and ran the ball 1 yard into the end zone. The Patriots trailed by four going into halftime, 14-10. During the second half, the Jaguars put up six points off of field goals from kicker Josh Lambo, including a 54-yard kick about five minutes into the third quarter.

Jacksonville led 20-10 early in the fourth, but New England wasn’t done yet. After a trick play and a Jaguars fumble recovery two minutes into the fourth (which resulted in a punt at the end of the following drive), the Patriots rallied and closed the gap to three.

Quarterback Tom Brady threw his first of two touchdown passes to wide receiver Danny Amendola at the 8:44 mark of the fourth. Brady found Amendola in open space for the score.

Brady would again target Amendola, but this time it was for the lead. Trailing by three with just under three minutes to go in the game, Brady found an open Amendola in the back of the end zone. Amendola acrobatically got both feet down after going up for the ball, and the touchdown would stand. The Patriots led 24-20 and wouldn’t look back, despite a potential Jaguars rally.

WHAT A CATCH BY @DannyAmendola!!

The Jaguars may have fallen short of the biggest game of the year, but head coach Doug Marrone said he believes they should “start from scratch” and build on their foundation next season. Jacksonville held New England to 10 points for most of the game, and overall, they finished the year having allowed the fewest passing yards per game and second in total defense. The Jaguars have young rising stars on defense, including former Gator Dante Fowler Jr., Jalen Ramsey and Myles Jack, to build around for the future.

With their win on Sunday, the Patriots advanced to Super Bowl LII and will take on the Philadelphia Eagles on Feb. 4 at 6:30 p.m. at U.S. Bank Stadium in Minneapolis.