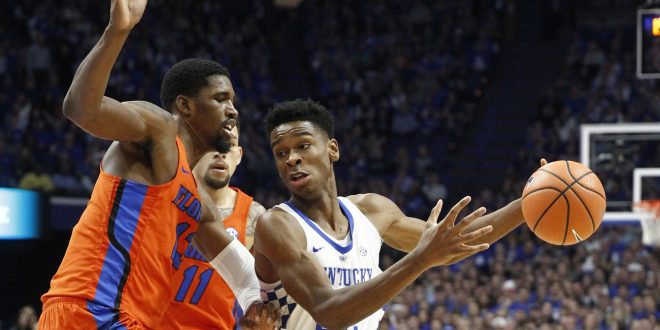 The Florida Gators did something against the Kentucky Wildcats on Saturday night that hadn’t been done since 2014. Florida’s 66-64 win over Kentucky marked the first time the Wildcats lost to an unranked opponent at Rupp Arena since February 27, 2014 vs. Arkansas. Jalen Hudson led all players with 17 points, adding 5 rebounds.

The Gators were outshot 40%-33% from the field, 24%-20% from beyond the arc and 67%-64% at the free throw line but were still able to pull out the victory. Jalen Hudson, Kevarrius Hayes and Chris Chiozza all made crucial stops in the final 25 seconds to give Florida the win.

No Kentucky player scored more than 10 points on Saturday night, as Shai Gilgeous-Alexander and Wenyen Gabriel both posted 10 points. Nick Richards’ 9 rebounds led the Wildcats as Kentucky killed Florida in the interior all night. 38 of Kentucky’s 64 points came inside the paint. UK outrebounded UF, 27-20, in the second half, grabbing 11 offensive boards in the final 20 minutes.

Chris Chiozza is the Mariano Rivera of the SEC. And he just closed out Kentucky in Lexington. Rupp Arena is silent. Florida wins.