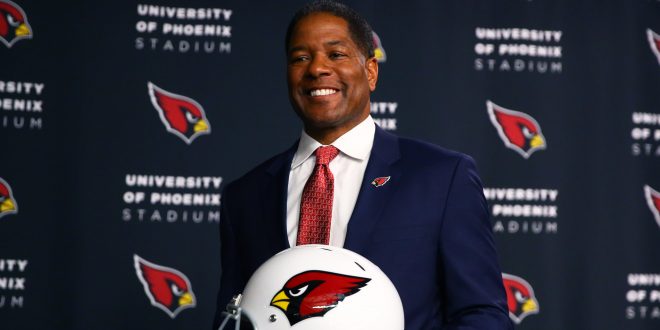 Jan 23, 2018; Tempe, AZ, USA; Steve Wilks poses for a photo after being introduced as the new head coach of the Arizona Cardinals during a press conference at the teams Tempe Training Facility. Mandatory Credit: Mark J. Rebilas-USA TODAY Sports

After six seasons on the coaching staff with the Carolina Panthers’ Steve Wilks will be the Arizona Cardinals’ new head coach. Former Cardinals head coach Bruce Arians retired at the close of the 2017 regular season after five years as head coach.

Wilks first and only other head coaching experience was in 1999, when he coached a single season at Savannah State. He has coached defense for several franchises in the NFL, including the Chicago Bears briefly, as well as the San Diego Chargers. Most recently, Wilks spent the 2017 season as defensive coordinator for the Panthers, leading them to success as Carolina finished the season ranked sixth in total defense, according to Sports Illustrated. Prior to that, he coached the Panthers’ defensive backs for five seasons.

Before signing a contract with the Cardinals, Wilks interviewed for the head coach position with several other teams, according to NBC Sports Pro Football Talk. Among those were the Chicago Bears, who fired him from his position as defensive backs coach in 2008. Ultimately, Wilks signed a four-year contract with a fifth year option in Arizona.

While Wilks’ strength lies in defensive coaching, it is the Cardinals offense that needs the most work. Arians was not the only member of the Cardinals to step down following the 2017 season. Starting quarterback Carson Palmer also retired, leaving the Cardinals in search of a quarterback for 2018. Wide receiver Larry Fitzgerald‘s future with the Cardinals is also questionable. These offensive vacancies have NFL fans uncertain about Wilks and the Cardinals.

Wilks will undoubtedly do an upstanding job with the talented Cardinals defense. But question is how they will go about managing an offense now searching for a new franchise QB and potentially number one wide receiver.

Wilks stated that his goal for the Cardinals offense is not to rebuild the roster entirely, but to “retool”.

Defensive side of the ball

Wilks’ defensive expertise is expected to strengthen an already impressive defense. The Cardinals’ roster includes several impressive names, including Chandler Jones, who boasts 59 combined tackles and 17 sacks in 2017. Arizona also has a number of young players who continue to improve, with linebacker Haason Reddick and safety Budda Baker, first and second round picks in 2017, respectively.

Wilks’ Incoming Goals for the Cards

Moving forward from, Wilks says he wants to “establish a culture of winning” for the Cardinals. In order to do that, he assures that he will push his coaching staff and players to excel in everything they do, commenting,

I grew up in the Washington, DC area and now I'm a Gator. I'll always be learning more about myself, others and the world around me. And I'll always be talking about sports.
@kelsey_godman
Previous No. 9 Gator Men’s Tennis Looks to Improve to 2-0
Next Georgia Bulldogs Battle Kansas State Wildcats in SEC/Big 12 Challenge