The Florida Gators men’s tennis team hosts the ITA Kickoff Challenge Saturday and Sunday. On Saturday, the Gators match-up against the University of South Alabama at 2 p.m.

Like the Gators, South Alabama won their 2018 season opener 6-1; however, the Gators are a very different beast than Xavier University of Louisiana.

A beautiful day in ☀ Florida to get ready for this weekends @ITA_Tennis Kick-Off Weekend! #ITAKickOff pic.twitter.com/4U5mNqw1YS

In their opener against UCF, the Gators may have seemingly won by a landslide, but the sophomore leader of the team was not pleased. Johannes Ingildsen voiced his frustration with the aggressive play style used against their in-state opponent.

Ingildsen and his doubles partner Alfredo Perez came into the match ranked No. 1 duo in the country. However, that quickly changed as the two fell into an early 4-0 hole. Their attempt to battle back fell short as they lost 6-4. Fortunately, the Gators rallied around them as they swept the Knights the rest of the way.

The native from Cuba, Alfredo Perez, was not as critical of their performance, saying he believes they should learn from it and move on. 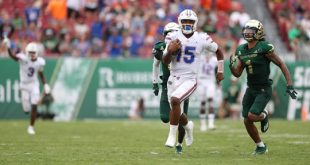