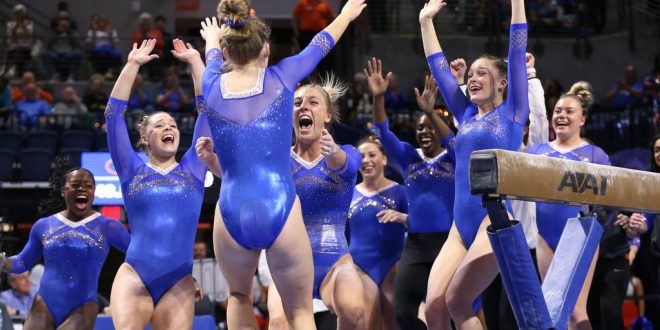 During the Gators' meet against the Oklahoma Sooners on Friday, January 26, 2018 at Exactech Arena at the Stephen C. O'Connell Center in Gainesville, FL / UAA Communications photo by Tim Casey

The fifth-ranked Florida gymnastics team beat the number one ranked and two-time defending national champion Oklahoma Sooners Friday night. The meet ended with a final score of 198.150 – 198.125. Florida pulled off an impressive win in front of another sold-out crowd of 9,652.

We're so thankful for all of #GatorNation for being the best fan base & selling out the O'Dome 2⃣ meets in a row!! We heard all 9⃣,6⃣5⃣2⃣ of you cheering loud & proud for us! #GoGators pic.twitter.com/E9FxVUNKkg

The Gators and the Sooners have dominated the past five seasons. The Gators won the title in 2013 and 2015. The Sooners have completed back-to-back championship seasons, winning in both 2016 and 2017. In 2014, the two teams finished in a tie, the first in NCAA gymnastics history. Friday’s meet provided a look into what the postseason could look like.

Florida’s Alex McMurtry scored two 10’s; her first ten came on vault, the second came on the beam. With these two perfect scores, McMurtry completed a gym slam — earning a perfect score in every event over the course of her career. She joins Bridget Sloan as the only other Gator to achieve this and McMurtry is the only Gator to score to perfect 10’s in the same meet.

Friday’s meet came down to the final moments, with the last scores being the deciding factors. Heading into the final rotation, Florida and Oklahoma were tied at a score of 148.575. The Sooners were on beam and the Gators were on floor. Senior Kennedy Baker performed an energetic and crowd-pleasing floor routine, earning an almost-perfect score, a 9.975. However, freshman Alyssa Baumann closed out the rotation for the Gators and scored a 9.925, just enough for the Gators to edge out the Sooners.

The Gators will travel to Alabama next week to take on Auburn. The meet starts at 7 p.m.

Born and raised at the ballpark! Typically quiet- until it comes to sports. I'm a South Florida native with a passion for baseball nearly as strong as my faith. Grew up in garnet + gold, turned out sporting orange + blue. Likely to be found with a camera. And yes, I take food pictures.
@victoriarossman
Previous SEC/Big 12 Challenge: Vandy Hosts TCU
Next O’Sullivan: “We’re Not Defending A National Championship” With Gator Baseball