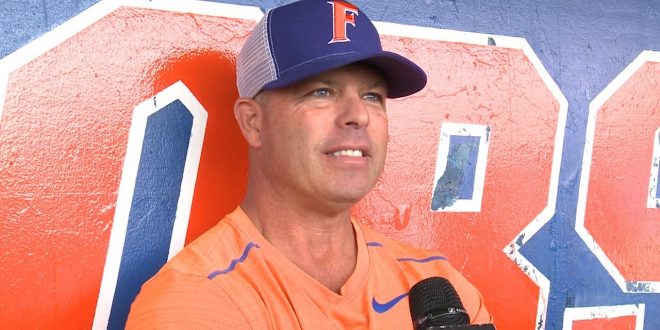 O’Sullivan: “We’re Not Defending A National Championship” With Gator Baseball

The Florida Gator baseball team is the unanimous preseason number one team in the country after winning the program’s first national title a year ago but Gator coach Kevin O’Sullivan doesn’t want to hear it.

Before the team hit the field for their first practice of the 2018 season, O’Sullivan talked about the expectations for his ballclub coming off of a national championship.

“The biggest thing for us is being able to turn the page,” O’Sullivan said. “Sometimes in the fall, it wasn’t easy to be quite honest with you. We’ve talked extensively about it. We’re not defending a national championship, we’ve got different players, it’s a different team.”

With a lot of new faces in the clubhouse, O’Sullivan does not know what to expect from his team early in the season.

Junior starting pitcher Jackson Kowar talked about how different it is going into this season compared to a year ago.

“It’s a brand-new team, we have so many brand-new freshmen it almost feels like a different dynamic with this team,” Kowar said. “I think all of us are kind of excited to have a new identity with this team.”

Work To Be Done

Before the umpire yells play ball on opening day, the Gators have a few questions that need to be answered.

O’Sullivan said his team has a few things to take care of during their preseason practices.

“Number one is to get healthy, stay healthy,” O’Sullivan said. “Build up our starters pitch count and get them ready for the first weekend.”

The biggest concern O’Sullivan has with his pitching staff is the gap between the starters and Michael Byrne at the end. He believes the team will be fine at the end but emphasized that it would take some time to figure out because of the youth on the staff.

The Gators will be playing intrasquad scrimmages all weekend long in preparation for their first game of the 2018 season on February 16.

Previous Gators Gymnastics Defeats No. 1 Oklahoma
Next No. 20 Florida Dominant In 81-60 Victory Over Baylor in SEC-Big 12 Challenge