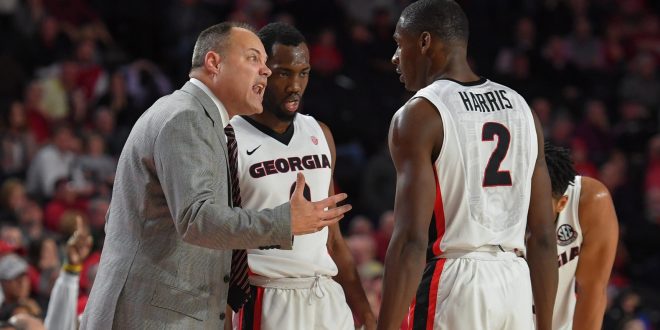 The Florida Gators have squared off against the Georgia Bulldogs a program-record 145 times since 1949. The Gators have won 86 of those games, including the last 4 meetings between the two teams. Coming into Tuesday’s match-up, Florida is ranked No. 23 fresh off of a 21-point victory over the Baylor Bears in the Big 12-SEC Challenge. Georgia has lost 5 of their last 6 games, with their only victory in that span being a one-point victory over LSU in Baton Rouge. Steve Russell of Sportscene sat down with Georgia basketball analyst Chuck Dowdle to preview Tuesday night’s showdown between the Gators and Bulldogs.

#Gators up to No. 21 on KenPom. Taking on Georgia (No. 71) on Tuesday night. #UGA is 1 of the better defensive teams in NCAA, but have trouble scoring outside of Yante Maten. Maten is averaging an SEC-leading 19.6 PPG and 9.2 RPG. No other player is averaging more than 9.5 PPG.

Down On The Dogs

Georgia has not played good basketball as of late. While the Bulldogs are one of the top defensive teams in the nation and are ranked 20th in the NCAA in defensive efficiency, they’ve had a real tough time scoring. UGA is ranked 311th out of 351 D1 teams in three-point percentage and are averaging only 64.1 points per game on 39.5% shooting during SEC play. In Georgia’s most recent contest vs. the Kansas State Wildcats, the Bulldogs went 2-18 from beyond the arc in a 56-51 loss. Chuck Dowdle said on Sportscene with Steve Russell that Georgia would more than likely have to win 7 of their 10 remaining conference games to have a shot at making the NCAA Tournament.

While Georgia only has one player averaging double-digit scoring, that player, Yante Maten, is leading the SEC in points per game. The senior forward is posting 19.6 PPG and is second in the conference in rebounds per game with 9.2 RPG. He’s also leading the SEC in offensive rebounds (78 OR), win shares (4.1 WS) and usage percentage (30.9%). Maten has recorded 9 double-doubles this season. Chuck Dowdle discussed what Maten has meant to this Georgia team.

As discussed before, Yante Maten is the only Bulldog averaging double-digit scoring. The team’s next highest scorer, William Jackson II, is scoring only 9.5 PPG. Jackson II has scored 10 or more points in only 2 of the team’s last 9 games. Georgia’s offense as a whole is only averaging 69 points per game. Chuck Dowdle broke down who needs to step up on UGA’s offense.

Georgia is 3-5 on the road this season and and 1-2 in SEC away games. In conference play, home teams are 38-18 this season, the 6th-highest home winning percentage of any conference in Division I college basketball. Chuck Dowdle discussed why it has been so much harder to win on the road in the SEC this season than in previous years.

The Georgia Bulldogs were picked to finish 8th in the SEC this season in the pre-season media poll. Yante Maten was one of three players selected as the SEC Pre-Season Player of the Year. While Georgia started out the season strong with wins over Temple, Marquette and No. 13 St. Mary’s, the Bulldogs have struggled as of late. Since that win over Temple on December 22, Georgia has gone 3-6. Chuck Dowdle explained why he thinks the Bulldogs are struggling recently.

Florida and Georgia tipoff at Stegeman Coliseum in Athens at 7 p.m. on Tuesday. You can watch the game live on the SEC Network or the WatchESPN app with Tom Hart and Jon Sundvold on the call. You can also listen to the game on ESPN 98.1 FM/850 AM WRUF and the Gator IMG Sports Network with Mick Hubert and Mark Wise. Pre-game coverage starts on ESPN 98.1 FM/850 AM WRUF at 6:25 p.m.