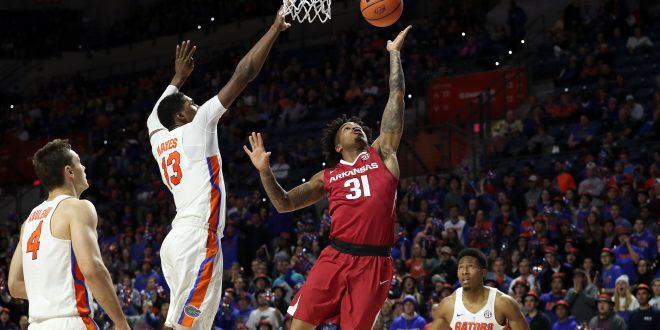 Kevarrius Hayes Key to a Gator Win Against Georgia

Florida’s game against rival Georgia Tuesday night is an important game for the Gators.  A win puts the team closer to taking first place in the SEC and could help them move up in the AP Poll.  Kevarrius Hayes has an important role against Georgia: stopping Yante Maten.

How Big of a Threat is Yante Maten?

Georgia is a defensive team and Maten is one of its most valuable players.  The Bulldogs will try to run Florida off the court and stop them in the paint.

Hayes is prepared for this and knows how intense Georgia’s defense is.

What The Gators Need to Do to Pull Out a Win

In order for the Gators to stop Georiga and Maten, they must get the rebounds, especially on defense.    Maten has 78 offensive rebounds, which turn into easy second-chance points.

Help defense will be huge in this game as well.  The Gators have to talk on the court and listen to each other so they can stop Maten from scoring.

Hayes said the team has confidence in each other because they’ve been able to connect.

Florida also has to be ready to spread the floor to clear out the paint.  It will be Hayes job to distract Maten so his teammates can drive the paint.  He will also have to step up and not allow Maten to shut him down.

Playing Maten at home isn’t a concern for Hayes.  He said his team relies on each other since they don’t have the fans to count on.

Tip off is set for 7 p.m. and will air on the SEC Network.

Nicolette is a senior at the University of Florida who has participated and enjoys reporting on all things related to sports.
Previous Florida-Georgia Preview With UGA Sports Analyst Chuck Dowdle
Next Eddy Pineiro Preparing for NFL Draft