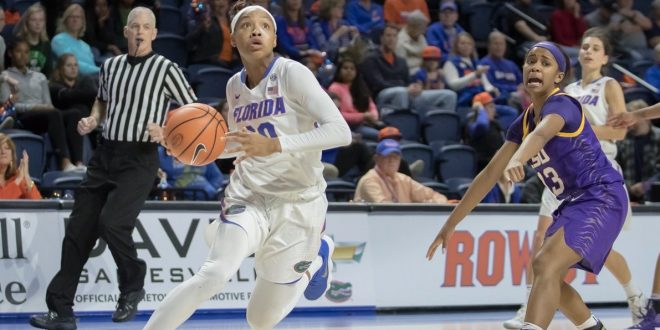 The Gators women’s basketball team has inched closer and closer to pulling off an upset win. They hung around with number two Mississippi State in the first half; they took rival and 21st ranked  Georgia to the fourth quarter holding the lead throughout the game. On Monday, the Gators fought the entire game against 15th ranked Missouri, but couldn’t seal the deal. Florida loses a tough one 66-64 to the Tigers.

The Gators and Tigers engaged in a back and forth fight Monday night. The lead changed hands 10 times and the two were tied six times. Two free throws from Missouri’s Jordan Frericks gave the Tigers the lead with 6:46 remaining in the game. The two teams would exchange baskets with Missouri keeping the slight edge. A layup from Frericks put Missouri up 66-61 with just 1:10 left. This would be the last bucket for the Tigers on the night.

The Gator defense got the defensive stops necessary to stay in the game. A corner three-pointer from Florida junior guard Funda Nakkasoglu cut the Missouri lead to just two, 66-64, with just over a minute left in the game.

Throughout the night, it seemed as if the game would come down to the final play. And the game ended just as expected. Florida had possession down by two. The inbounds went right to Florida sophomore guard Delicia Washington at the three-point line. She was met with stiff defense from Missouri senior Bri Porter. Washington deferred to senior forward Haley Lorenzen, who launched a prayer from way beyond the three-point line faced with tight defense. The shot was off the mark and the Gators fall just short of the upset win.

The three-point shooting woes made their way to Columbia, Missouri in the game’s first quarter. It was evident that the Gators tried to establish the three-point shot early to build some confidence on the road.  Florida couldn’t get any threes to fall. The Gators shot an abysmal 1-12 (8%) from beyond the arc in the first quarter. The shooting woes in general in the first quarter saw Florida shoot 4-19 (21.1%) and only put up nine points, forcing Florida to play catch up. The Gators finished the game with a typical number for the team, going 9-33 from three.

Florida sophomore guard Delicia Washington has been a strong contributor for the Gators on both ends of the court this season. Washington posted her best statistical performance of the season Monday night in Missouri. She had a season-high 23 points, fueling the Florida starters, who totaled all of the team’s 64 points on the night.

Proud Of The Fight

Even though the game didn’t go the Gators way, Monday night’s tough road loss to Missouri showed how far this team has come from early in the season.  They didn’t back down against a top-20 opponent on the road in what has historically been a tough place to play and had a chance at the end to pull off the upset.

“I’m tremendously proud of our fight and team effort,” Newbauer said postgame. “I couldn’t ask for anything more from our team right now.”

The Gators will have another opportunity to knock off a ranked opponent. They return home Thursday night when they host number two Mississippi State. The Bulldogs beat the Gators 90-53  back on January 25. Round two between these two teams tip off Thursday at 7 p.m. from Exactech Arena.