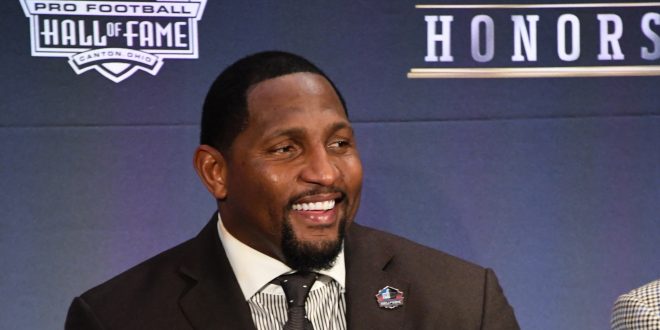 Former Ravens’ linebacker Ray Lewis was elected as the newest member of the Pro Football Hall of Fame in his first year of eligibility.

Lewis was named into the Hall of Fame in Minneapolis, Minnesota this past Saturday, on the same day as the fifth anniversary of the Ravens victory in Super Bowl 47.

The Ravens Super Bowl title marked the final game of Ray Lewis’ career, leaving “the game” the best way anyone could dream of.

Ray Lewis is the only player in NFL history with 40 sacks and 30 interceptions in a career.

Furthermore, Lewis remained a Raven throughout his entire 16-year tenure in the NFL. The 13-time pro bowler and the Ravens’ second draft choice (1996 draft) had a tremendous career that deserves all the credibility he’s been awarded.

Prior to Lewis’ second Super Bowl title, the Ravens went on to defeat the New York Giants in the Super Bowl to achieve their first franchise title. Lewis was named Super Bowl MVP while leading the leagues best defense. A defense that established a 16-game single-season record for least points allowed in a game while amounting to four shutouts, one shy of the post-1970 merger, according to Baltimoreravens.com.

Lewis’ Impact on the Game

"Respect is earned. Respect is never given." pic.twitter.com/U4Uhe3A5IE

Ultimately, the Ravens head coach John Harbaugh and owner Steve Bisciotti had some words of admiration for their former player.

“Ray represented Ravens football perfectly. He established what it means to play like a Raven, which has become a standard we believe in and our fans understand,” said Harbaugh a couple days prior to the HoF induction ceremony. “It was an honor to coach Ray on the field and to maintain our friendship off it.”

“Obviously there is nobody more deserving, said Biscotti on behalf of Lewis’ impact. “He made people around him better, which is the greatest compliment that you can give anybody in football, and he clearly was that guy.”

Both quotes are according to local Baltimore news station CBS13.

As seen below, the reaction from Ray Lewis receiving his honorary invitation to be inducted into the Hall of Fame was recorded and uploaded to Twitter.

The moment the 2018 HOF class found out they were being inducted. (via @ProFootballHOF) pic.twitter.com/hlQhhPHrrB

Emotional moments ran through the minds of the Hall of Fame Class of 2018. They were Brian Urlacher, Brian Dawkins, Randy Moss, Terrell Owens, Jerry Kramer, Robert Brazile and Bobby Beathard.

Lastly, Lewis spoke with the media and delivered his thoughts on his nomination, induction, and placement as an immortal member of Canton’s legendary club.

Recent grad from the University of Florida. Editing all articles on here while helping out the newbies. Love all things basketball.
@@MarcoJMartinez_
Previous Brian Urlacher Added to the Football Hall of Fame
Next Gator Women’s Basketball Hard Fought Effort Not Enough To Upset No. 15 Missouri