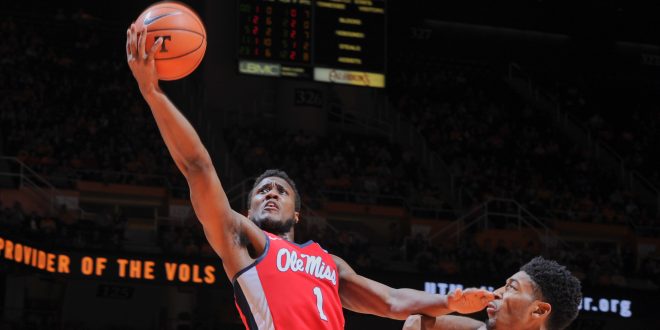 The Ole Miss Rebels will travel and face the LSU Tigers this weekend for a Saturday afternoon SEC match-up. Right now, both teams are ranked 10th in the SEC. This will be the first time the teams meet this season.

The last time they faced each other was during the 2016-2017 season, and Ole Miss pulled off an impressive win at home, beating the Tigers 96-76.

A win Saturday, for either team, could boost confidence while the Rebels look to snap their four-losing streak and the Tigers look to bounce back from a 73-64 road loss on Wednesday against Florida.

Also, they have not won a road game this season, which will prove to be another obstacle in Saturday’s game that the Rebels will try overcome.

Ahead of Tuesday night’s game against Missouri, where Ole Miss lost 75-69, head coach Andy Kennedy commented on the league and how he prepares his team going into each SEC match-up.

Right now, senior guard Deandre Burnett leads the team in points and assists per game with an average of 14.4 points and 4.4 assists, while junior guard Terence Davis averages 6.1 rebounds per game.

The Tigers are coming off a road loss where they fell 73-64 to Florida on Wednesday night. This loss puts them at 13-10 overall, and like Ole Miss, 4-7 in conference play.

However, they are 9-4 at home and are hosting a team that has not won a single road game this season. Will the Tigers make their home win record double-digits?

For the Tigers, freshman guard Tremont Waters leads the team with an average of 15 points and 5.9 assists per game, while senior forward Aaron Epps averages 5.9 rebounds per game.

Will the Rebels snap their four-game losing streak? Or will the Tigers come out on top and earn another home victory?

The teams will take the court Saturday afternoon in Baton Rouge. Tip-off will be at 4 p.m. and will air on ESPNU.