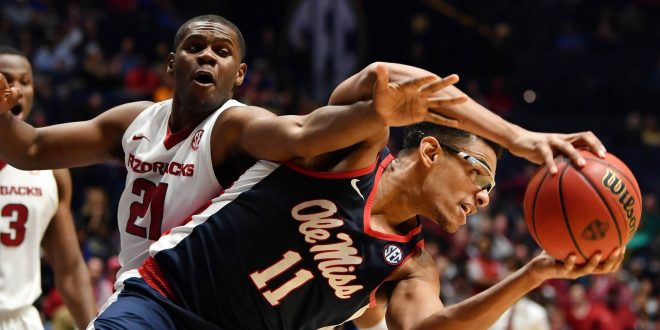 Ole Miss is currently 4-8 in conference play and averages 71 points per game. This will be the 79th meeting between the two schools with the Razorbacks holding an all-time series lead of 46-32.

Two players to look out for on the Rebels are Deandre Burnett and Terence Davis. The duo scored 46 of the teams 81.7 points over the last three times these SEC teams met.

However, the Rebels will play this game knowing their head coach, Andy Kennedy, is stepping down at the end of the season. Kennedy made the announcement during a press conference Monday afternoon.

Kennedy has more wins than any coach in the program’s history and guided Ole Miss to the SEC tournament title in 2013. Tonight’s game will be Kennedy’s 400th as the Ole Miss head coach.

THIS JUST IN: Ole Miss and Andy Kennedy have agreed to part ways at the end of the season.

Kennedy will exit as the winningest coach in Ole Miss history. pic.twitter.com/sdidaWXYyx

The Razorbacks are on a high right now winning five of their last seven games; they are currently 4-8 in SEC play and 11-14 overall. Jaylen Barford and Daryl Macon are two Arkansas players to look out for; they rank first and second in the league in scoring in SEC games.

Macon has scored 20 plus points in seven straight games and is looking to tie Razorback legend, Corliss Williamson, as the only players in the SEC era to do it in eight consecutive contests.

A win for the Razorbacks would give Arkansas four straight wins against Ole Miss for the first time since the 1994 National Title season.

There are multiple SEC match-ups hitting the hardwood tonight. No. 21 Texas A&M is at Missouri, South Carolina heads to No. 18 Tennessee, and LSU is in Alabama.

Meanwhile, Florida will take on Georgia tomorrow at home. Tip-off is at 9 p.m.