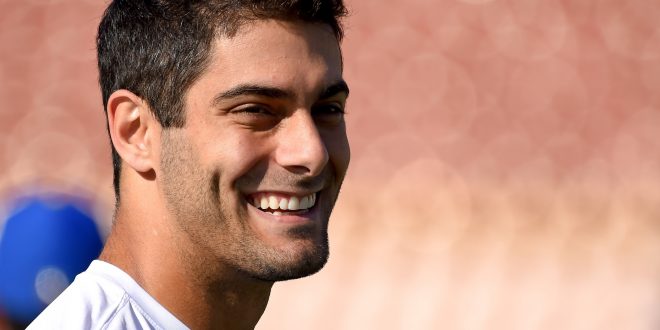 San Francisco 49ers quarterback Jimmy Garoppolo signed a five-year, $137.5 million contract extension this past weekend. Garoppolo will be the highest paid player in NFL history. Garoppolo had a tremendous 6-game outing while also winning all five of the games he started this season. The New England Patriots traded Garoppolo to the San Francisco 49ers mid-season for a 2018 2nd-round draft pick.

Jimmy G, the nickname Garoppolo has been given, was excited on behalf of hearing the news on his contract extension and praises his team. He’ll be looking forward to playing for the 49ers these next five years.

Once in San Francisco, Jimmy appeared in his first game coming off the bench in the final minute of the game against the Seattle Seahawks on November 26. Garoppolo carried the team into the end-zone for their only touchdown of the game.

The Jimmy Garropolo Era has finally begun for the #49ers . pic.twitter.com/K9FZfu94QJ

Garoppolo showed he had potential over their former starting quarter back C.J Beathard. He continued his hot streak by going undefeated in the next five games he started. That includes against the Chicago Bears, Houston Texans, Tennessee Titans, Jacksonville Jaguars and Los Angeles Rams.

Garoppolo will receive $42.6 million this coming season on his first year of the new contract, according to ESPN NFL insider Adam Schefter. Later, he will be cashing in $18.6 million in his second year, officially making a substantial $61.2 million over the first two years of his contract. Garoppolo also has $48.7 million guaranteed and an additional $25.4 million if he gets injured.

Furthermore, this contract is betting against the odds, as it’s a pricey deal for a sub-par team, leaving their trust and future of this organization in the hands of a former Tom Brady protege. But, the 49ers have a comfortable $74 million salary cap space which have many fans feeling comfortable with this decision.

At this rate, the best quarterbacks in high school are on their way to 200+ million $ contracts easily.

This deal potentially sets the bar for other quarterbacks in the league with expiring contracts. Quarterbacks like Drew Brees of the New Orleans Saints will become an Unrestricted Free Agent this off-season. Washington Redskins quarterback Kirk Cousins will also be making a big splash in free agency in once March comes around.

The Falcons and the Packers have also spoken on terms of creating new contracts for Matt Ryan and Aaron Rodgers. Pittsburgh Steelers quarterback Ben Roethlisberger and Seattle Seahawks quarterback Russel Wilson are among some candidates of contract extensions sooner or later.

Although, this record-setting contract extension for Garoppolo is impressive, it won’t be the largest for long.