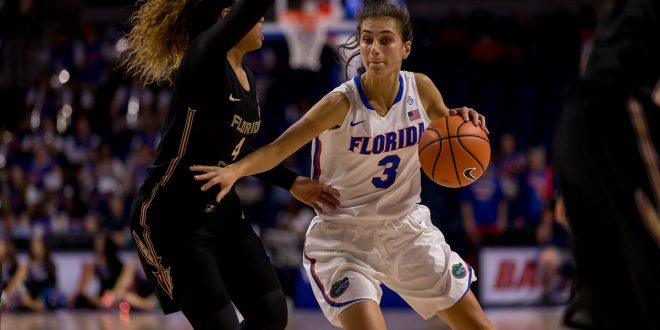 The last seven games against ranked SEC opponents for Florida women’s basketball has been trying at times. This stretch has gone one of two ways for Florida. They have either been blown out the gym or have come so painstakingly close at the end but can’t seal the deal. Following a respectable performance against defending champion South Carolina, the Gators are showing signs of confidence heading into the final game of this stretch. The Gators head to College Station to face a talented Texas A&M team. Just like other matchups with ranked opponents this year, the Gators are confident and ready for the challenge.

Florida’s 7-point loss to No. 7 South Carolina showed that the team is hitting their stride. At one point in the first half, Florida led by double-digits. The effort they showed by going toe to toe with the reigning champions and making it a four-quarter game shows how far this team has come.

Embarking on this stretch of playing some of the best teams in the country can do damage to a team’s confidence. During this stretch and throughout the season, the Gators have always looked at the big picture and focused on themselves.

Sunday’s performance against a talented opponent on their home floor provided the boost this Gator team has been searching for all season. The Gators put together a gameplan that put the Gamecocks in some difficult spots during the course of Sunday’s matchup. Their execution on both ends of the floor gave the Gators a chance in the fourth quarter to make some plays to get the win.

Florida junior guard Funda Nakkasoglu said that the team’s trust in their training has allowed them to build confidence.

The Gators have experienced major turnover on the bench this season. Bench players such as guard Sydney Morang and mid-season addition Gabby Seiler suffered season-ending injuries. Guard Elif Portakal has been dealing with back issues for several weeks now and hasn’t seen the floor. Florida freshman guard Tameria Johnson has seen increased minutes in Portakal’s absence.

Her role increased, even more, when sophomore guard Sydney Searcy left the team. She hasn’t been with the team since the Missouri loss. Newbauer addressed the situation and said that Searcy has somethings she needs to sort out. Florida is now left to an eight-player rotation, with only one reserve guard in the rotation.

Newbauer said that the team is focused more on doing the best with the roster they have rather than comparing numbers to other teams.

The Florida starters have been forced to play an insane amount of minutes to compensate for the lack of depth on the bench in terms of numbers. The five starters are tasked with playing close to a complete game night in and night out.

Florida senior forward Haley Lorenzen said that the increase in minutes this season hasn’t taken a toll on the starters.

The No. 17 Aggies come into Thursday’s game with the Gators with a 19-7 record. They are coming off a devastating 80-78 loss to LSU on Sunday. Led by head coach Gary Blair, the Aggies run a very balanced offense that can beat you inside or outside. That attack is led by freshman phenom Chennedy Carter. Carter leads the team in scoring, averaging over 20 points a game. She even has a 46 point performance under her belt against USC earlier this season.

Florida appears to be taking the approach of focusing on Carter rather than just letting her go. The reason is clear, she can take over a game and beat you herself alone. Florida will have to contain her as best as they can.

Following five straight losses, the Gators are long overdue for a win. They haven’t won a game against a ranked opponent all season.

Nakkasoglu said that the team is motivated to pull off the win against a ranked opponent.

The Gators will wrap up this six-game stretch of facing ranked opponents in College Station where they’ll take on No. 17 Texas A&M. Tip-off is set for 8 p.m. Thursday.