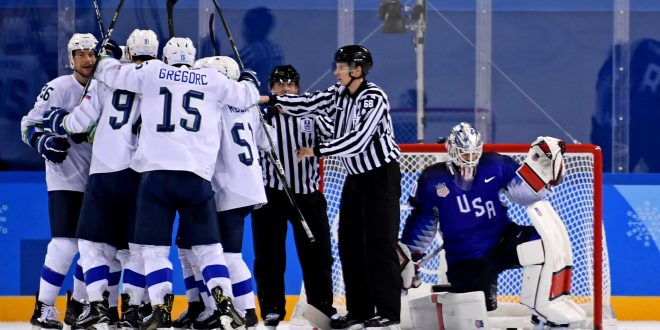 From curling to speed skating, there is so much happening in Pyeongchang, South Korea at the 2018 Winter Olympics, it is almost overwhelming.

Heading into group play, many expected the United States men’s hockey team to make run for a medal this year, as they do every four years in the Olympics. However, the team got off to a bad start as they lost to the massive underdogs of Slovenia.

The US held a 2-0 lead into the third period.  with 14:11 left in regulation, Slovenia’s Blaz Gregorc cut the lead in half and shifted the momentum.

The flood gates then opened as the US played on their heels for the rest of the game.

With the goalie pulled and 1:37 left on the clock, Jan Mursak tied the game up. Mursak, the only player on the Slovenian roster with NHL experience looked to be the best player on the ice down the stretch. Just 38 seconds into the 3-on-3 overtime, Mursak set up teammate Ryan Zapolski for the game-winning goal. A shocker to the hockey world.

The United States had good performances early from players like US forward Brian O’Neill. However, the late rally from Slovenia was too much for the Americans.

“That third period,” O’Neill said, “is something we need to learn from.”

FINAL | U.S. Men's Team falls to Slovenia in OT to open play at the #WinterOlympics.

The Americans were not alone as the Olympic Athletes from Russia were also stunned by Slovakia, losing 3-2 as well.

The Group B for men’s hockey is still wide open with lots of play still to go.

While the United States is still in the top five for medals so far in Pyeongchang, it is Germany and Norway who lead the pack.

Germany, who leads nations in gold medals with eight, added another one early this morning in figure skating.

Norway added to their already-impressive medal count early this morning. With two new gold medals and two new silver medals to their collection, Norway leads all nations in total medals with 16.