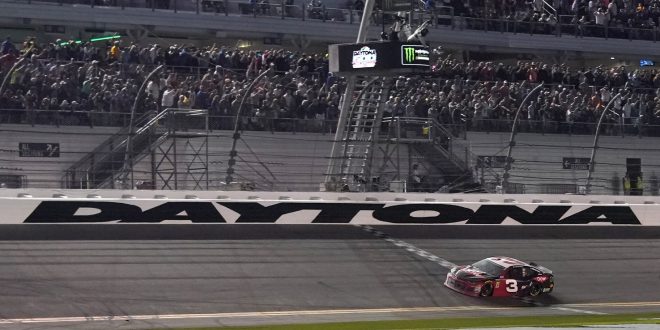 The iconic No. 3 Chevrolet once driven by Dale Earnhardt Sr. was back in the victory lane on Sunday at the Daytona 500, but this time Austin Dillon was behind the wheel.

This was a special victory for the No.3 car for quite a few reasons. 20 years ago, Dale Earnhardt Sr. won the only “Great American Race” of his career at the 1998 Daytona 500. 17 years ago to the date on February 18th, 2001, Dale Earnhardt Sr. passed away in a tragic car accident while competing at the 2001 Daytona 500. On Sunday, Austin Dillon got his first win at Daytona in that same Chevrolet No.3 that Dale Earnhardt Sr. once drove. Dillon pulled off the victory in spectacular fashion, passing Aric Almirola in the final lap to take home the checkered flag. Dillon led the race for only one lap- the most important lap of the race.

Right after Dillon clinched the victory, he dedicated his win to Dale Earnhardt Sr.

Darrell “Bubba” Wallace Jr. had quite an emotional day at the 2018 Daytona 500. Wallace became the first African-American driver to compete in the Daytona 500 in almost 50 years. Before the race, Wallace received a phone call from legendary athlete Hank Aaron giving him words of encouragement. Wallace’s family was there to support him on Sunday. On top of all that, the 24-year-old driver finished 2nd in his first ever Daytona 500. Wallace had a very emotional press conference after the race, where his mother and sister embraced the moment with him.

The emotions came pouring out after a P2 finish for @BubbaWallace.#DAYTONA500 pic.twitter.com/QspZyBm0TM

Plenty of Drivers End the Day in Disappointment

This year’s “Great American Race” saw several stars end their day with car wrecks. Chase Elliott, Jimmie Johnson, Danica Patrick, Vegas-favorite Brad Keselowski, and others all wrecked out of the race. With two laps left in the race, a big multi-car crash sent the race to overtime.

The BIG One happens with 2 laps to go!! #DAYTONA500 pic.twitter.com/GbtW7C5ZIx

For Danica Patrick, this race was a disappointing last race of her career. Patrick said she wished this race could’ve been a “storybook ending” to her career, but it didn’t go the way she wanted it to.