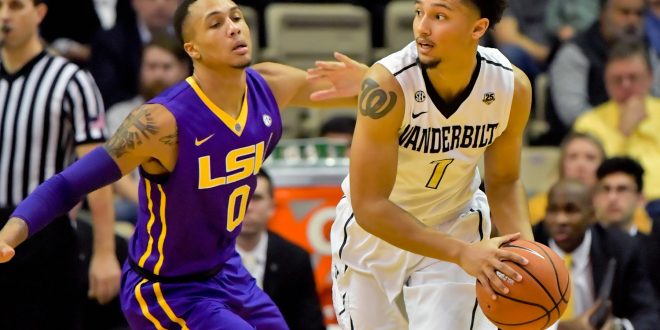 This game is a rematch of LSU’s 71-77 loss to Vanderbilt in January, but LSU has yet to win a road game this season.

LSU is currently tied for ninth with Georgia and Ole Miss in the SEC, and Vanderbilt is tied with South Carolina for 12th in the league.

The Commodores are looking for their third straight win. They beat Mississippi State 81-80 Wednesday and then the Florida Gators 71-68 Saturday, both in Nashville. Senior Jeff Roberson was named SEC Player of the Week after averaging 24 points and nine rebounds with two assists in the two wins.

Averaged 24 pts, 9 reb and 2 ast in two wins; is @VandyMBB's leading scorer and rebounder. @j5robe is the #SECMBB POTW. pic.twitter.com/5XHHLKVMrf

On Saturday, Roberson scored a game-high 26 points with a perfect 12-for-12 in free throws. Fellow senior Riley LaChance also put 21 points on the board, while junior Joe Toye added 13 points contributing to Vandy’s victory.

In the last five games, Toye is averaging 13.8 points per game. He tied a season-high of 16 points in games against Kentucky and Mississippi State.

.@Tremonth2o HIGH off the glass for the WIN!! #BootUp #LSU pic.twitter.com/ipwKtRCcbZ

With 20 seconds left freshman Tremont Waters shot off the backboard to give LSU the win. Head Coach Will Wade said Waters is coming out strong after his ankle injury.

Wade said the combination of two players, plus Vanderbilt coming off two wins is a threat to his team.

Kate Venezio is a fourth-year telecommunication-news student at the University of Florida. Kate does it all: Behind the camera she captures emotional moments as a photographer for the University of Florida Athletic Association. She's comfortable being in front of the camera, too. Kate interviews players, coaches, fans and family members for pre- and post-game coverage as a beat reporter for ESPN Gainesville/WRUF-FM. In addition, Kate produces the sports segment for the weekly WUFT News program. There, she's responsible for writing the script in its entirety to include production commands. The presentation includes video highlights and interviews taped and edited, and Kate then live anchors the final package on a daily deadline. In addition, she writes stories for wruf.com where she informs sports fans of local, state, and national trending topics. Kate also utilizes social media as a tool to help get the stories in front of viewers.
@@kate_venezio
Previous SEC Matchup: Texas A&M Hosts Mississippi State
Next Preview: No. 1 Florida Baseball Welcomes FAU for Mid-Week Matchup