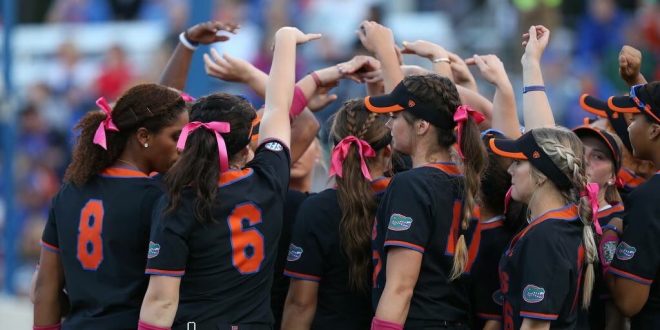 The Florida Softball team starts an eight-game homestand with a doubleheader against Oakland on Wednesday.

The Gators are now ranked number one in the latest ESPN/Coaches Poll and stand 8-1 after losing their first game of the season this weekend.

After defeating the Louisiana Ragin’ Cajuns in a Saturday doubleheader, Florida just couldn’t pull off the sweep on Sunday.  The game went extra innings and in the top of the 11th, the Gators finally broke through when freshman Hannah Adams doubled to center field. This scored senior Aleshia Ocasio, who reached on a walk to start off the inning.

But in the bottom of the inning, Louisiana hit a two-run walk-off home run to end the game.

Gator coach Tim Walton was not impressed with the way his team played this past weekend.

Walton says that he is showing his team all the errors they made from over the weekend and hopes that will affect the way they play on Wednesday.

There are six true freshmen on this Gator softball team this year:

Adams and Matthews have proven to be valuable to this team by stepping up in high-intensity situations.  But Walton says that Gator fans should expect to see more of the other freshmen in the upcoming games as well.

“Kinda excited to see our team get back out there and get on the field and get some different faces in the starting line-up this week. We’ve got a couple young players that are ready to go and excited to get them going.”

The first game of the doubleheader will start at 4 p.m. at Katie Seashole Pressly Stadium.

The second game is set to start at 6 p.m. but could change depending on the game before. Stay up-to-date on Twitter.

This game will be aired on SEC Network+.